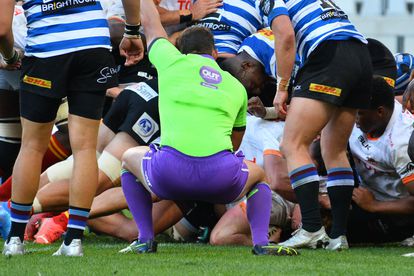 A second half fightback from the Cheetahs helped them beat WP and stay unbeaten in this season’s Currie Cup. Photo: Grant Pitcher/Gallo Images

A second half fightback from the Cheetahs helped them beat WP and stay unbeaten in this season’s Currie Cup. Photo: Grant Pitcher/Gallo Images

Western Province couldn’t find an extra gear as the Cheetahs turned things around in the second half to gain an important 28-21 Currie Cup victory at the Cape Town Stadium in Cape Town on Friday evening.

WP led 16-7 at the halfway stage through one converted try and three penalty goals, while the Free State side replied with a converted try.

In the end, the Free Staters clinch the game through three well-constructed, converted tries in the second half.

Thanks to their bonus-point win, the Hawies Fourie coached side remains unbeaten and move to within one point of the Bulls (32 points) on the Currie Cup league table, having played one game less than the men from Pretoria.

The fixture was one of contrasting fortunes for the two sides. The first half belonged to the fired-up home side, while the Free State visitors played much better in the second half to maintain their unbeaten status in the competition.

It was also a memorable occasion for Cheetahs prop Aranos Coetzee, who played in his 100th match for the Free State side. The 34-year old front ranker has also played in 24 Tests for Namibia.

WP made all the play in the opening 10 minutes and came close to scoring on a number of occasions. Credit however to the Free Staters who defended intelligently to keep the home side at bay.

WP also elected not to go for posts with a couple of penalties awarded to them close to their visitors’ tryline.

In contrast, the Cheetahs made good on their assault on the home tryline when prop Alulutho Tshakweni dived over for his maiden provincial try, with skipper Ruan Pienaar adding the extras.

Pivot Tim Swiel then got WP on the scoreboard with a straightforward penalty goal. (7-3).

With the home side camping in their opponents’ 22m territory and conceding penalties at regular intervals, referee AJ Jacobs punished Tshakweni with a yellow card for a repeated offence. This allowed Swiel to step up and to steer over the easy goal attempt (7-6).

Tristan Leyds, the WP fullback, handed his team the lead when he scored a fine individual try which Swiel converted, while the No 10 also added a third penalty kick to stretch the half-time lead to 16-7 in favour of the Cape side.

Angelo Davids (wing) gave the home team a perfect second half start when he was on hand to take a final pass and dot down in the right-hand corner. WP were now in command at 21-7.

However, the more experienced and battle-hardened Free Staters were determined not to make it an easy afternoon.

Hooker Louis van der Westhuizen proved just that when he crossed the whitewash following a powerful lineout mall. Pienaar added the conversion to reduce the deficit to 21-14.

Outside centre David Brits was next to cross the home tryline under the sticks courtesy of a deft pass from the experienced Frans Steyn.

Pienaar’s conversion meant the teams were now level at 21-21 with still plenty of time to play.

Cheetahs had the final say in the match

A crucial scrum penalty in front of the opposing tryline gave the white jerseys another lineout mall opportunity, which Van der Westhuizen grabbed with both hands as he scored his second of the afternoon.

The Capetonians had a couple of opportunities to try and rescue the game, however, they were left frustrated by some basic errors.