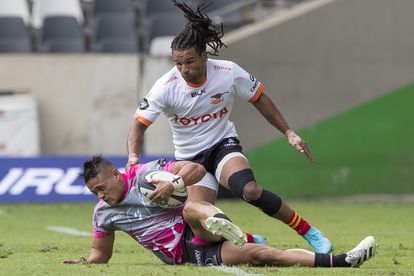 NELSPRUIT, SOUTH AFRICA – FEBRUARY 19: Devon Williams of the Pumas and Rosko Specman of the Free State Cheetahs during the Carling Currie Cup match between Airlink Pumas and Toyota Cheetahs at Mbombela Stadium on February 19, 2022 in Nelspruit, South Africa. (Photo by Dirk Kotze/Gallo Images/BackpagePix)

NELSPRUIT, SOUTH AFRICA – FEBRUARY 19: Devon Williams of the Pumas and Rosko Specman of the Free State Cheetahs during the Carling Currie Cup match between Airlink Pumas and Toyota Cheetahs at Mbombela Stadium on February 19, 2022 in Nelspruit, South Africa. (Photo by Dirk Kotze/Gallo Images/BackpagePix)

The Cheetahs continued their perfect start to the Currie Cup with a 28-17 win over the Pumas in Nelspruit.

The visitors won the try-count 3-1 in a scrappy affair to make it three from three and move to the top of the table.

Humidity ruled out an enterprising encounter, with the visitors in particular guilty of coughing up the ball on several occasions.

That said, both coaches would be disappointed by their charges’ sub-standard performances.

The decorated duo of Frans Steyn and skipper Ruan Pienaar played pivotal roles in winning the kicking battle. Steyn carved out both of the Free Staters’ first-half tries and landed a late three-pointer. Meanwhile, Pienaar contributed 10 points off the tee.

Hawies Fourie’s men shot themselves in the foot with basic errors and indiscipline. They conceded 11 penalties in the first half alone. As a result, Eddie Fouché kicked four penalty goals to cut the Cheetahs’ lead to 15-12 at half-time.

The Lowvelders had the ascendency in the set pieces but lacked strike power, eventually scoring through Eduan Swart. They were also unable to stop the Cheetahs’ driving maul, which earned the visitors two of their three tries.

The Pumas took the fight to the visitors immediately, with Fouché on the money to draw first blood.

Pienaar levelled the scores right away with a long-range penalty goal. That came Shane Kirkwood had been pinged for a no-arms tackle.

The hosts backed their driving maul as they turned down two kickable penalties. They came away empty-handed though from their early visit to the attacking 22.

A penalty kick into touch by Steyn put the Cheetahs in prime position. It was then that their dominant driving maul came into play and resulted in Gideon van der Merwe scoring the opening try in the 13th minute. The try went unconverted

Steyn’s boot produced another try five minutes later, a perfectly weighted grubber off the left foot staying in the field. Miscommunication between Devon Williams and Jade Stighling allowed Rosko Specman to snap it up on the second take and pop the ball to Clayton Blommetjies for a simple walk-in. Pienaar this time added the conversion to put the Cheetahs up by 15-3.

The Pumas regrouped and replied with back-to-back Fouché penalty goals to reduce the deficit to six and when Blommetjies’ restart went out on the full, there was a sense that the momentum had shifted into the home team’s favour near the 30-minute mark.

However, Steyn pinned them back in their 22 where the Cheetahs set up camp for several minutes only for poor handling to derail their efforts. The Pumas flexed their muscles in the set pieces, first in the scrum and then in the lineout, to secure another shot at goal and Fouché nailed the long-range effort.

That meant the sides went into the sheds with the Cheetahs holding a slender three-point lead, however, it was the Pumas who had their tails up after having dominated the final 10 minutes of the opening stanza.

The Free Staters came out with renewed hunger and reclaimed control with another well-worked maul try, this time Louis van der Westhuizen flopping over. Pienaar was successful with his conversion attempt to take the lead out to 10 after 46 minutes.

However, the Cheetahs’ disciplinary problems persisted and after a barnstorming run from captain Willie Engelbrecht inspired his troops, the Pumas finally breached the line and scored a maul try of their own through Swart. Fouché’s first miss of the afternoon made it 22-17.

A really scrappy period ended with Pienaar restoring a two-score buffer with a second penalty goal in the 62nd minute, which brought the clock into prominence for the first time.

Jimmy Stonehouse’s charges pressed and threatened to score only for their fire to be extinguished for the time being by a vital breakdown penalty from Marnus van der Merwe inside his 22 with nine minutes remaining.

The Cheetahs had a few opportunities to secure the four-try bonus point. However, they ultimately settled for the win with Steyn adding a vintage long-range three-pointer.