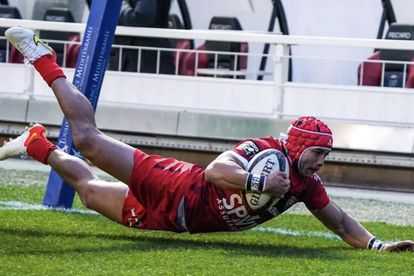 Lyon’s defence helped the Top 14 team to its first European title with a comprehensive victory over Toulon in the Challenge Cup final. Photo: Twitter

Lyon’s defence helped the Top 14 team to its first European title with a comprehensive victory over Toulon in the Challenge Cup final. Photo: Twitter

Kolbe has been out of action for several weeks due to a hand injury, but has recovered quickly, and he will now feature alongside Bok teammate Eben Etzebeth in the European Challenge Cup final against Lyon at the Stade de Marseille on Friday night.

Should Toulon emerge as winners, it would be the club’s first Challenge Cup victory, having previously been crowned three-time Champions Cup winners between 2012 and 2015.

Kolbe’s return from injury will also come as an encouraging piece of news for the Springbok coaches, who are set to name the first squad of the year in the coming days.

It’s already been confirmed that three leading Boks will be unavailable for the mid-year Tests against Wales, with back-up scrumhalf Cobus Reinach having undergone surgery for a shoulder injury, which will keep him out of action for between three and four months.

After the Wales Tests, South Africa will then host New Zealand in Nelspruit and Johannesburg (Saturday, 6 and 13 August) and Argentina in Durban (Saturday, 24 September) in their Rugby Championship home Tests.

The Boks will play two away Tests against Australia (Saturday, 27 August and 3 September respectively) and one against Argentina in Buenos Aires on Saturday, 17 September.

Meanwhile, the Boks have selected Toulon as their base for the pool stages of the Rugby World Cup in 2023 in France, with the team set to be based in Paris for their third pool match against Ireland in at the Stade de France in Saint-Denis.

The tournament kicks off on Friday 8 September and runs until Saturday, 28 October 2023. The defending RWC champions and current top-ranked team on the World Rugby rankings had a selection of three potential bases in the south of France.