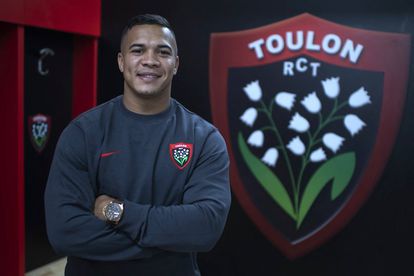 Springbok star Cheslin Kolbe was unable to inspire Toulon to victory in his Top 14 debut for the club against Stade Francais. Photo: AFP

Springbok star Cheslin Kolbe was unable to inspire Toulon to victory in his Top 14 debut for the club against Stade Francais. Photo: AFP

Toulon captain Baptiste Serin said Springbok star Cheslin Kolbe brings “serenity to the team” even though he was unable to inspire them to victory on his Top 14 bow for the club on Sunday as Stade Francais won 26-24.

Kolbe’s league debut in his new colours was delayed by injury and Covid-19 postponements.

The 28-year-old moved for a reported €1.8 million from Toulouse in August.

The loss in Paris kept Toulon in 13th place, the relegation playoff spot, but they have three games in hand over Perpignan in 12th. Victory lifted the home side to 10th.

Cheslin Kolbe, 28, started behind a pack which included former Parisian Sergio Parisse as the 38-year-old seeks to prove his fitness over the next three weeks before a potential Test return with Italy in the upcoming Six Nations.

“He’s a guy who plays right, he brings a lot of serenity to the team. Cheslin’s only played two matches, we have to be patient with Cheslin,” Serin told reporters.

“We know his ability with one-on-ones, he won all of them tonight. I found him serious,” he added.

By the time the Rugby World Cup winner got his first touch in the league his team already trailed after home flyhalf Joris Segonds kicked a second-minute penalty.

Segonds peppered Cheslin Kolbe with kicks. The fullback responded by setting up Toulon’s second try just after the quarter. His goose-step took him outside his defender before he fed Aymeric Luc who found Baptiste Serin with an inside pass for the scrumhalf to score. Louis Carbonel kicked the conversion to make it 14-3.

Stade hit back as Samoan prop Moses Alo-Emile claimed his first try for the club. Segonds slotted the extras after half an hour.

Carbonel kicked a penalty with five minutes left of the half and the away side led 17-10 at the break.

No 8 Parisse was replaced with 25 minutes remaining and was applauded off the field in the capital city, where he spent 14 seasons with Stade. He is expected to retire at the end of the campaign.

Segonds closed the gap to four points with 18 minutes left with a penalty before being replaced by Argentina flyhalf Nicolas Sanchez.

With a quarter of an hour to play Stade Francais re-took the lead as club veteran Antoine Burban crashed over.

Sanchez succeeded with the conversion and then with two later penalties as the home side had a 26-17 advantage going into the final five minutes.

Toulon pressed for a try to claim a bonus point and Serin turned the provider three minutes into added time to set-up Dorian Laborde.

Earlier, Pau beat Clermont 28-20 and on Saturday Racing overcame Toulouse 20-15 at the champions’ backyard as the likes of France’s world player of the year Antoine Dupont and Les Bleus flyhalf Romain Ntamack made their return from Covid-19 a week out from the start of the Six Nations.