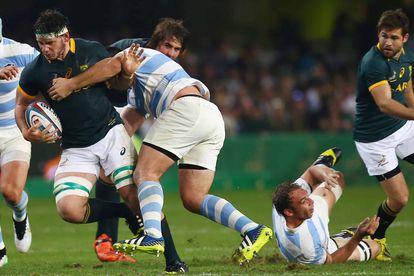 Marcell Coetzee in action for the Boks. Photo by Steve Haag/Gallo Images/Getty Images

Marcell Coetzee in action for the Boks. Photo by Steve Haag/Gallo Images/Getty Images

The Boks recently got their preparations for a testing international season underway as head coach Jacques Nienaber and his management team hosted the first of two alignment camps, but there was no space for Marcell Coetzee.

There had been some surprise that in-form Stormers star Evan Roos was said to have missed out on the first camp (although he earned inclusion for the second gathering), but few pundits really focused on the omission of Coetzee, who has consistently made an impact at the Bulls as a leader and player.

Coach Jake White, who led the Springboks to the 2007 World Cup title, has admitted he could understand some omissions based on the publicised Bok selection criteria, but felt it was a different situation with Coetzee.

“If I was the Bok coach I also wouldn’t want to pick young guns like Evan Roos and Elrigh Louw to replace proven World Cup winners in the Bok squad,” White told SARugbymag.co.za.

“A guy like Marcell is a little bit different – he’s a guy who has played 30 Tests, so if the Boks are placing a premium on experience, like they say, then I can’t see why he hasn’t been selected.

“I can only think he must be very close to being selected and that’s probably why not being invited to the alignment camps is so difficult to explain.

“If you just go on what their criteria is, Marcell played 30 Tests for South Africa, then played at a high level in the northern hemisphere, and has come back and shown he wants to be a Bok. He’s ticked every box.”

Coetzee has also spoken about his feelings after seemingly falling off the Boks’ radar.

“You can only control what you can, and that’s what you do on the field. You have to give everything and enjoy it while you can. Obviously, you do want a spot in the national team and it’s a pinnacle for South African rugby players.

“The coaches, though, know what they want in a player and who they’re backing, so they’ll acknowledge that.

“You just need to improve where you can so that you can be in their favour again.”

The Boks are preparing for a busy 2022 season, and it remains to be seen if the likes of Coetzee could be included at a later date

With the Springboks first Test against Wales less than three months away, Nienaber said the alignment camps were vital to get the players into the right frame of mind as they look ahead to an important season ahead with an eye on next year’s Rugby World Cup in France.

“We are excited to get our season underway and these alignment camps are vital as we have not played for several months,” said Nienaber.

“These sessions will ensure that we are all on the same page on and off the field when we begin our official training sessions. Most of these activities will involve boardroom sessions where we set objectives and align in terms of our planning.

“We will host similar camps with our overseas-based players in the next few weeks, but the door is not shut for other players to be invited to the remaining camps.

“It is also important to emphasise that being invited to these camps by no means is a guarantee of selection for the Castle Lager Incoming Tour squad, but rather an opportunity for the players to start switching into the mind-set required for the international season.”