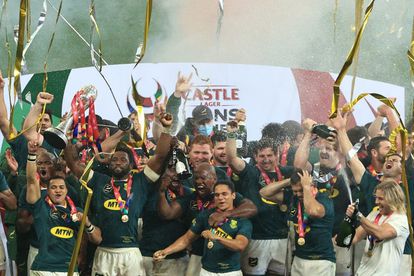 Morne Steyn and Frans Steyn became the first Springboks to be selected for two British & Irish Lions series, in the post-Apartheid era, but which members of the current squad can join their illustrious club in 2033?

A lot can change in 12 years

12 years ago Frans Steyn was still a fresh faced 22-year-old with a lot of experience, including a 2007 Rugby World Cup triumph under his belt when the Lions toured. Morne Steyn on the other hand, was less experienced and making his Springbok debut in that 2009 series triumph.

Morne had been in terrific form for his franchise side the Bulls in the lead up to that series, and after successfully knocking on the door, he was given his well deserved Springbok call up. Initially selected as a back up, with then coach Pieter de Villiers opting to start with utility back Ruan Pienaar at flyhalf, Steyn would emerge finish the tour as the starting flyhalf and a series hero

In 2021, Morne gave Springbok supporters a bout of de ja vu as he completed a similar feat with his last minute penalty conversion, which was enough to earn the South Africans a hard-fought 19-16 win and ultimately a 2-1 series victory. The celebrations showed you just how much this usually once in a lifetime experience means to the players, so which current Springbok squad members stand a chance to have another crack at it?

The nippy scrum half has already been an integral part of the Springbok set up since 2019. Since making his very impressive three try debut against the Wallabies in the Rugby Championship, Jantjies has scored many more impressive tries for the green and gold including the try that helped earn the draw against the All Blacks the same year. At the age of 25, he now has a Rugby World Cup, Rugby Championships as well as a British & Irish Lions series victory to his name.

Jantjies will be 37 in 2033, the same age as Pienaar who is still going strong for the Cheetahs so that may just offer the Stormers player a bit of hope that he could be the Springbok “experience head” like the two Steyn’s in 2033.

Possibly for the first time in his career, the utility player tag came to the advantage of Willemse. The mercurial player finally came into his own and made impressive use of his opportunities in the green and gold, which displayed maturity befitting of where he should be in his career right at 23.

A largely divisive figure amongst South African circles, with the debate always about can he make it as a flyhalf or is he escaping his destiny as full back, Willemse may have just opened up yet another debate that might not help him with how he filled in with aplomb at inside centre in the recently concluded Lions series. But it sure will help the Springbok coaches who continue to show faith in him.

Willemse played all three Tests from the bench, occupying two different positions on those occasions. He came on as a full back and as a winger in the Lions series but perhaps as a 35 year-old his best chance of making the British & Irish Lions Tour in 2033 might be at inside centre or flyhalf for the World Cup winner.

“Weekend Special” may not have played a single minute in any of the three Tests against the Lions, but the 23-year-old certainly proved his ability and versatility in his Springbok debut against Georgia just ahead of the tour.

The Qonce-born full back is adapt to playing on the wing as well which he exhibited with his classic “wingers try” against the Eastern European nation. However, Fassi might ironically become a casualty of his own special attributes come 2033. Fassi is very reliant on his explosive pace of the mark as well as his outrageous stepping abilities and one has to ask themselves how much of that will still be left in him at the age of 35.

Fassi’s best chance of making the 2033 Lions series may have to see him evolve has a technical veteran full back who relies more on his experience and positional awareness than the above attributes. Perhaps what also goes under the radar with regards to the former Dale College pupil is his ability with the boot. It might just end up being his best chance of longevity in Springbok colours.

The former South African Junior Player of the Year was roped into the Springbok squad as cover for the last Test after Faf de Klerk’s injury in the second game against the Lions. However, Hendrikse didn’t get an opportunity to make the match day squad understandably so.

Many felt the 23-year-old was unlucky to have missed out on the original squad for the Lions series but now that he has belatedly got his chance to be in the Springbok set up, it might be his position to lose. When he didn’t get his initial selection he didn’t down tools but used his snub as an opportunity to knuckle down and solidify his first choice scrum half credentials at the Sharks  and he got his bonus.

Springbok debut at some point during the tournament. Hendrikse has long been touted as a player who will have a long Springbok career but may have to fight of competition from Jantjies for the veteran scrum half role in the 2033 squad for the Lions tour.

The Bulls youngster earned a late Springbok call up as cover and with a view to the Rugby Championships. As it stands Grobbelaar may be fourth choice hooker behind the likes of Bongi Mbonambi, Malcom Marx and Joseph Dweba.

What is for sure, however, is that through the extensive faith Jake White has shown in Grobbelaar at the Bulls, his stock has firmly risen. The player who will turn 24 two days before the end of the year, is a classic South African style hooker, which is an advantage that could see him climb up the pecking order pretty swiftly.

He is aggressive in the carry, a monster in defence and very dangerous on the ground…Bismarck du Plessis anyone? Well just like du Plessis Grobbelaar will be hoping he can have a long Springbok career, starting with the upcoming Rugby Championships and possibly ending with him being one of the experienced heads in the 2033 Springbok squad for the Lions series