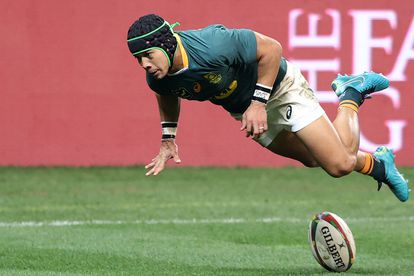 Springbok hot-stepper Cheslin Kolbe on Thursday won the SA Rugby Try of the Year award for one of his trademark five-pointers. Photo: PHILL MAGAKOE / AFP

Springbok hot-stepper Cheslin Kolbe on Thursday won the SA Rugby Try of the Year award for one of his trademark five-pointers. Photo: PHILL MAGAKOE / AFP

Cheslin Kolbe provided a moment of magic that turned the decisive third Test against the British and Irish Lions in favour of the Springboks.

The Lions led 10-6 at the break having mauled over for the first try of the game inside the first quarter of the match.

After a tight and tense series, there was no sign of things loosening up and their were few opportunities in the first fifteen minutes of the second half.

With the game finely balanced, the Springboks used a kind bounce to launch a quick attack, with Willie Le Roux unleashing Kolbe with a flat pass.

As Kolbe entered the 22 he still had plenty to do, turning two defenders inside out before sprinting over for a score that put the Springboks in the lead.

While Lions would draw level twice through the boot of Finn Russell, it would be Morne Steyn who played the decisive part as the Test match and series wound down.

Steyn goalled two penalties including one in the 79th minute to put the Springboks back in the lead.

Result of third and series-deciding Test between South Africa and British and Irish Lions at Cape Town Stadium on Saturday: