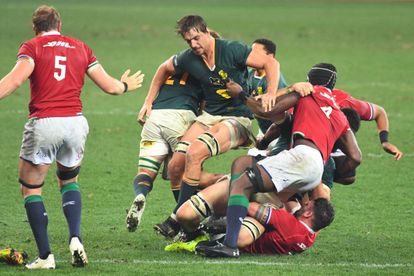 Eben Etzebeth during the series against the British and Irish Lions. Photo: Getty Images

Eben Etzebeth during the series against the British and Irish Lions. Photo: Getty Images

The British and Irish Lions are by no means a beaten side heading into the final Test and the mind games between the two camps continue.

Alternative facts from the Gatland playbook

From the broadcast footage it was apparent that, in most cases, the flare-ups were instigated by the Lions, with Maro Itoje, in particular, going out of his way to get into the Springboks faces.

There hasn’t been a terrific amount of sincerity coming out of the British and Irish Lions press conferences with Lawes playing his part in the soap opera.

“We can’t get too caught up in the niggle of stuff, scrapping,” Lawes said.

“It just slows down the game and it doesn’t help us. We like a high-tempo game.

“They came with a clear gameplan last game and that was to slow the game down. We’re a really fit team and we want to move the ball.

“It’s obviously going to be tough and it will be a conscious effort to stay out of that dogfight because I imagine that’s what they’re going to bring again.”

The Lions didn’t move the ball particularly well in the second Test and saw Dan Biggar kick the ball away from just outside the Springboks 22 without the benefit of an advantage on multiple occasions.

Lions assistant coach Gregor Townsend said that moving the Springboks big men around would be key to them breaching the hosts resolute defence.

“If you create opportunities, you have more chance of winning the game,” Townsend said.

“You may create more through pressure. We know we have to control the game more by moving South Africa around, draining them of energy whenever we can.”