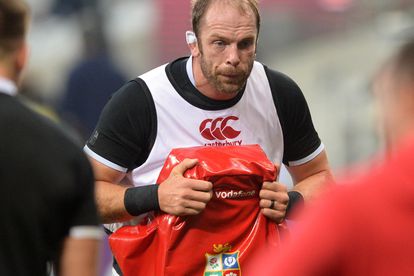 Alun Wyn Jones ended his British & Irish Lions career on an emotional note after the third Test against the Springboks in Cape Town at the conclusion of “a special tour for the wrong reasons.” Photo: Ashley Western/MB Media/Getty Images

Alun Wyn Jones ended his British & Irish Lions career on an emotional note after the third Test against the Springboks in Cape Town at the conclusion of “a special tour for the wrong reasons.” Photo: Ashley Western/MB Media/Getty Images

Alun Wyn Jones ended his British & Irish Lions career on an emotional note after the third Test against the Springboks in Cape Town at the conclusion of “a special tour for the wrong reasons.”

The Lions captain attended a press conference, still wearing his playing kit and carrying a beer, after his team were beaten 19-16 in the series-deciding encounter.

The world’s most-capped rugby player, with 160 international appearances, set a professional-era record by appearing in 12 consecutive Lions Tests – playing in all three internationals on each of four tours, going back to 2009.

Alun Wyn Jones, 35, confirmed that it was his last Lions tour.

“I probably can’t put it into words, so I’m not going to try,” the 1.98 metre lock said when asked what playing for the Lions had meant to him.

“I’m probably going to get a bit of stick for being over-emotional. If people think I’m over-emotional, that’s what it means to me.”

Jones, who made a remarkable recovery from a shoulder injury in order to join the tour in the week of the first Test, said his enthusiasm for the Lions was sparked by television coverage of fellow Welshman and current Lions kicking coach Neil Jenkins during the 1997 tour of South Africa.

“I remember watching Jenks in ’97, so to be involved with him and Wales and to be out here with him is really special,” he said.

Jones repeated remarks he made during the after-match presentation about it being a special tour, with the players having what he described as the “privilege” of playing sport when many people had suffered during the worldwide Covid pandemic.

“To be out here in South Africa, which is facing its own struggles with Covid, to be part of this, it’s been a special tour for the wrong reasons.”

If anything, though, it made Saturday’s defeat even more painful.

“To get so close, to fall short on a very special, very different tour probably hurts more than if it was a bigger loss,” he said.

Alun Wyn Jones said key moments and tight decisions made the difference in a match which could have gone either way, even after Morne Steyn kicked a penalty goal for South Africa in the 79th minute on Saturday.

“But that’s all hindsight, that’s the game,” he said.

Were South Africa worthy winners of the series?

“Credit to South Africa, they won,” he said.

“I’ve played the game long enough to know that the words I say, people won’t be happy with, taking it out of context, putting it in a context they see to fit their narrative.

“I’ve got to set an example. I have to give credit to South Africa.”

After the match the Lions players came together in a group on the field.

“(If you play in) the next one make sure you go as hard as hell because it’s a very special privilege.”