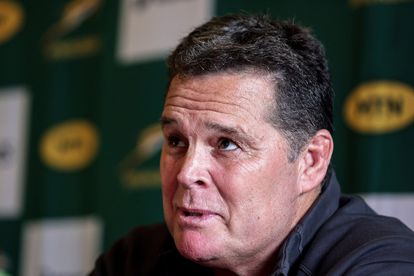 France claimed a 30-26 win over the Springboks on Saturday night, with some contentious decisions from referee Wayne Barnes particularly coming under the spotlight during the latter stages of the game. However, many of the headlines and reactions since Saturday’s match have also centred around the response from Rassie Erasmus, who has made a series of social media posts in the wake of the defeat.

In reaction to the widespread backlash from these posts, Erasmus appeared at a press conference on Tuesday, where he sought to set the record straight by explaining that he was simply looking to keep the broader South African rugby public well informed.

World Rugby have been notably silent on the matter but in an interview published on RugbyRama, there have been some notable comments made by Joël Jutge, who is head of the organisation’s match officials.

Jutge added that the attitude of Erasmus was a concern to World Rugby, but he didn’t provide any clarity over whether another sanction could be possible.

“His attitude is a concern for World Rugby and Rassie Erasmus’ peers do not share his way of doing things. It is contrary to our values, even if this word is sometimes overused. Erasmus does not serve his cause and it is surprising to see him continue in this way.

“All referees are affected by these attacks on referees in general and Wayne Barnes last weekend. Because by doing so, Rassie Erasmus opens the door to violent behaviour and behind it, entire families are insulted and affected. It is extremely dangerous. But some people think that if the South African coach talks about a referee like that, they have the right to do it too…”

Below, you can watch what Rassie had to say earlier this week, and make up your own minds.

To recap the latest turn of events, in the early hours of Sunday morning, Rassie Erasmus shared a clearly sarcastic message on Twitter, which said in part: “We just have to fix these fundamental errors like tackle technique and simple passing. Sorry!”

The first tweet from Erasmus’ social media handle of @Rassie Rugby included a video showing Cheslin Kolbe on the receiving end of a dangerous forearm to the face early on in the game, while spotlighting a pass from Willie le Roux that was contentiously ruled to have gone marginally forward.

That first post already came in for quite a bit of criticism in the comments section, but on Sunday afternoon, Erasmus simply doubled down as he posted a series of other videos clearly highlighting contentious refereeing decisions.

Speaking on The Telegraph’s ‘Rugby Podcast’, well-known former Test referee Nigel Owens has admitted he could barely believe the tweets from Erasmus were genuinely coming from his official handle.

“I saw these [videos] come up and I was thinking ‘is this his genuine profile? To me, we don’t need that in the game and I’d have thought he’d have learned his lesson by now, if it is him doing this. There’s a procedure in place.

“If you’re not happy about decisions, or you have questions about decisions – as every coach would have – referees can’t get everything right, there is a process to go through. You send your timeline to the referee manager, which would be Joel Jutge at World Rugby, and they would look at that with the referee.

“Then they would reply to the coach and say: ‘Yeah, this could have been penalised’ or ‘the referee is correct here’. Or, like a lot of things in rugby, it’s: ‘This is a grey one. This is what the referee feels and it’s his interpretation of it [but] it could well have gone the other way’. That’s the nature of the game.

“Once you start putting things out there on social media questioning decisions, that’s not what this game is about, I don’t think. I don’t think this it’s right and I don’t like it. Go through the proper channels, and as long as everyone is open and honest and transparent… that is the way forward, not [to do it] on social media.”

The twitter rants from Erasmus have led to a widespread reaction, with many articles – both in South Africa and abroad – having been written about this social media use, which is certainly unusual for a director of rugby.

In response, Erasmus has now posted another tweet, saying: “Guys please (feel) free to block or mute me, it’s really not a problem and better for our health! Sorry if any of the tweets were offending you! Also if you don’t agree with my tweets, please ignore them and don’t use for click bait man, use your own tweets and stuff. Don’t be a parasite. Lekka!”

You can check out the tweets and videos from Rassie below:

Below you can see just some of the articles that have popped up in relation to Erasmus’ Twitter posts.