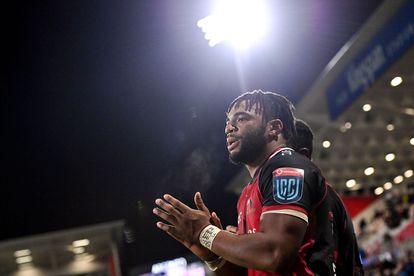 Vincent Tshituka is heading to the Sharks. Photo: Archives

Vincent Tshituka is heading to the Sharks. Photo: Archives

“This hard-hitting loose forward has been pure fire this season with four United Rugby Championship Player of the Match awards to his name and he is now gaining his fin,” the Sharks posted on social media. “Welcoming Vincent Tshituka to #OurSharks family, as he joins us on a 3-year contract.”

Tshituka will add further depth to the Sharks’ already impressive loose-forward stocks, and is sure to learn plenty from fellow flanker Siya Kolisi.

Last Wednesday, the Sharks announced on their social media pages that Janse van Rensburg is also on his way to Durban.

This announcement came hot on the heels of confirmation earlier this season that Eben Etzebeth is also heading for KwaZulu-Natal as the Sharks continue to build a truly world-class squad of high-quality players.

The six-foot, 109kg, Janse van Rensburg is seen as a missing piece in the puzzle for the Sharks, with the 27-year-old set to offer the kind of muscle in midfield that has been missing since Andre Esterhuizen departed the union for Harlequins in England.

“I played with Rohan for a while and he is a fantastic player,” assistant coach Warren Whiteley commented. “It’s great to see his development and the good rugby he plays,” the 23-capped former Bok skipper told Netwerk24.

“We are very excited to have him here and we look forward to the impact he will make here. He is athletic and has a lot of explosive power. It will be nice to see him in South African rugby again.

“You want him [Janse van Rensburg] to have the ball in his hand as much as possible. He pulls defenders and it usually takes more than one to pull him flat because he is so powerful.”

You can watch his video message to the Sharks below:

Recently, Etzebeth revealed why he was looking forward to returning to South Africa from France, where he has been playing for Toulon. Considering that the towering lock is now 30-years-old, he could quite possibly come to the end of his career at the Durban-based franchise should he see out the full five years of his contract.

It’s all part of a bold vision that the Sharks hope will eventually see them become one of the most successful global rugby clubs, with a target having already been set to win the Champions Cup in the coming years.

However, it’s worth noting that Sharks supporters will need to be quite patient as they prepare for the first matchday experience of seeing Etzebeth in the black and white colours of the coastal side.

As it is, the World Cup winner is only set to “join” the Sharks in July after the conclusion of the European season.

The Springboks’ Test schedule obviously also gets underway in July with three Tests against Wales, while the national team will then head straight into preparation for the Rugby Championship that will run over August and September.

Realistically, it means that Etzebeth is then only likely to make his Sharks debut towards the end of this year, which will in all likelihood be during the start of the second season of the United Rugby Championship.

Although it means there will be a fairly lengthy wait for the lock to make his Sharks debut, Etzebeth has reiterated that there is lots to look forward to in the future.

“I’m looking forward to coming to The Sharks and living in Durban and I expect this to be a wonderful chapter in my career. Family and being closer to home was a big motivating factor, as well as being able to represent a great team like the Sharks.

“I can see things are happening there, Siya [Kolisi] is there and we’ve been friends since were in the provincial Under 19s together and now we will get to play for the Sharks together. Along with my Springbok team-mates Bongi Mbonambi, Makazole Mapimpi, Lukhanyo Am, Thomas du Toit, all guys I know well. I’m also really excited to meet a few new guys.”

He added that playing home games at Kings Park also excites him.

“I chatted to Siya, I gave Thomas a call and chatted to them. Off the field, things work, on the field we can see things are working and the team is doing well, I enjoyed watching the last game against the Bulls and the victory away from home and this is a brand I definitely want to be associated with and which I’m proud to be joining.”