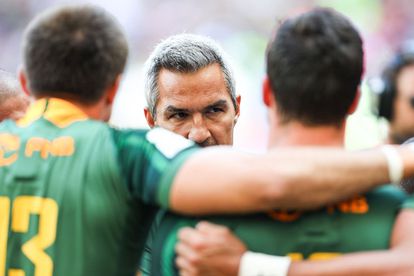 On Saturday, a lack of defensive cohesion and an under-powered team effort led to the Blitzboks team dropping out of Cup contention at the LA Sevens on Saturday.

The Blitzboks lost matches to USA and New Zealand in their pool B fixtures on Day One of the last tournament in the HSBC World Rugby Sevens Series (match reports here) and coach Neil Powell said afterwards the team effort was not good enough.

“We conceded way more tries than usual and that was very disappointing,” said Powell. “For me, the defensive effort from the players was too individualistic and we did not trust the system. When we play as a unit, it brings us success and that did not happen out there.

“It was not always due to a lack of trying, some guys really did their best out  there, but rather players wanting to do things on their own. That is not what we stand for as a team, hence the disappointment.”

The coach said they were not expecting miracles on day two, when they faced Wales in the 9th place play-off, and once again things didn’t go their way as they plunged to a shock 10-5 defeat.

Ultimately, it’s been a tournament to forget at the worst possible time considering that the Blitzboks will soon head into the Rugby World Cup Sevens event in Cape Town.

“We have Dewald Human and Zain Davids out already, so will need to look toward the Rugby World Cup Sevens in Cape Town in two weeks’ time and start to manage some of our key players accordingly,” Powell said.

“We will see where we are in relation to the World Series table and then plan from there.”