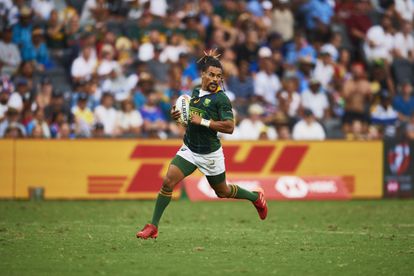 SYDNEY, AUSTRALIA – FEBRUARY 02: Selvyn Davids of South Africa makes a break to score a try during the 2020 Sydney Sevens Semi Final match between South Africa and USA at Bankwest Stadium on February 02, 2020 in Sydney, Australia. (Photo by Brett Hemmings/Getty Images)

SYDNEY, AUSTRALIA – FEBRUARY 02: Selvyn Davids of South Africa makes a break to score a try during the 2020 Sydney Sevens Semi Final match between South Africa and USA at Bankwest Stadium on February 02, 2020 in Sydney, Australia. (Photo by Brett Hemmings/Getty Images)

The Blitzboks made a fast start to the World Sevens Series Campaign in Dubai with a trio of opening day wins.

Drawn in a tricky group that included Ireland, Japan and Great Britain, the Blitzboks settled into their rhythm early and stayed there.

Kicking off the day with a clash against Ireland, the Blitzboks returned a 28-7 win over Ireland before blasting past Japan 52-12 and running out 31-12 victors against Great Britain.

The Blitzboks gave Ireland a taste of what they bring to the party early as exemplified by Muller du Plessis’ crunching hit that set up a South Africa try.

Ronald Brown converted all four tries against Ireland, two of which he scored himself, while Selvyn Davids also crossed their opponents’ try-line twice as the Blitzboks overcame a potential tricky first hurdle in the tournament, played at the Sevens Stadium in the UAE.

The Blitzboks led 14-0 at the break, and doubled their score in the second half, while Ireland got a late try by Sean Cribbin, which he converted himself.

Their second game delivered more of the same as the Blitzboks again doubled their first-half score after the break, this time racing away to a massive 52-12 (half-time 26-7) win over Japan, with eight tries added to their tally.

Japan, who went down 17-12 in their tournament opener against Great Britain, struggled to keep up with the South Africans’ attacking flair and pace, as Siviwe Soyizwapi and Selvyn Davids scored two tries apiece, while Brown added five and Branco du Preez one conversion.

Muller du Plessis, Zain Davids, Christie Grobbelaar and Shaun Williams also crossed for tries as the Blitzboks delivered a commanding performance to remain at the top of Pool C.

Despite a slow start in their final pool game on Friday, the Blitzboks found the right gears at the right time to cruise past Great Britain by 31-12 in their pool decider after leading by 12-5 at the break.

Robbie Fergusson scored early for the Brits, but the Blitzboks hit back with tries by Du Plessis – who scored after a magnificent solo-effort but was sadly stretchered off the field just before the break – and Soyizwapi to take the lead.

Great Britain pulled level early in the second half, but the Springbok Sevens team found their groove to score three more tries, by Impi Visser, Soyizwapi and Branco du Preez for a well-deserved win.