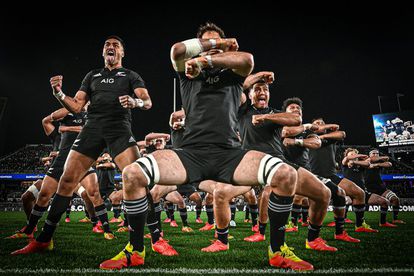 The All Blacks and Wallabies have named their sides for Saturday’s second Bledisloe Cup clash which also doubles as their Rugby Championship opener. Photo: Twitter @AllBlacks

The All Blacks and Wallabies have named their sides for Saturday’s second Bledisloe Cup clash which also doubles as their Rugby Championship opener. Photo: Twitter @AllBlacks

New Zealand have made only one change to their starting line-up for the second Bledisloe Cup Test against Australia at Eden Park in Auckland on Saturday, as they look to erase glaring issues in their first Test performance.

The All Blacks were outplayed at the start and end in their 33-25 victory a week ago and while coach Ian Foster said there was plenty to work on to achieve a more complete performance, the only change is as a result of injury.

Rieko Ioane has been moved to the midfield in the team named on Thursday, replacing Anton Lienert-Brown, who took a knock to his knee at the weekend.

Sevu Reece swaps to the left wing, with the high try-scoring Will Jordan coming in on the right after missing the first Test because of injury.

A win for the All Blacks at their Eden Park fortress, where Australia have not won since 1986, will see them secure the Bledisloe Cup for a 19th consecutive year.

The Test is also the opener for the Rugby Championship series, which includes South Africa and Argentina.

“We were delighted with the result last weekend and obviously had some things that we had to work on this week, so that has kept us focused,” Foster said.

“We know that Australia will be disappointed with the result and will lift. It’s a do-or-die game for them.

Foster has retained the same run-on forward pack but has made changes on the bench where Scott Barrett, who was a late withdrawal from the first Test, returns to the pine in place of Patrick Tuipulotu.

Meanwhile, the Wallabies have called up hardman Lachie Swinton as they take an aggressive approach to the make-or-break Bledisloe Cup clash.

Australia’s talk of “in their face” rugby has not gone unnoticed by New Zealand, already one-up in the three-match series and bidding to retain the prized trophy for a 19th consecutive year.

“We’re going to get a more committed Australia team and we need to make sure we’re matching fire with fire.”

READ | FROM TEST FAMINE TO FEAST FOR SPRINGBOKS IN 2021

Neither the All Blacks nor the Wallabies were happy with their performance in the first Test last week, where New Zealand’s victory was built on a burst of three tries early in the second half.

Wallabies coach Dave Rennie made four changes, saying he wanted to put “steel” into the Australians and while his side respected the All Blacks “we don’t fear them”.

Blockbusting wing Marika Koroibete is back after being omitted from the first Test for breaching team protocols around drinking, Matt To’omua adds experience at inside centre, while Swinton and lock Matt Philip beef up the forwards.

When Swinton was selected for his maiden Test last year, also against the All Blacks, Wallabies captain Michael Hooper talked of his reputation for “bringing a real aggression” to the game.

“That’s what he’s been picked for,” Hooper said.

Swinton only lasted 35 minutes before a high shot on All Blacks lock Sam Whitelock saw him sent for an early shower.

Rennie has marked the breakdown as crucial to controlling the Test.

“You’ve got to be able to get in their face, and with Swinno coming in and Matt (Philip) coming in it gives us more of an edge,” he said, adding he had no concerns around Swinton’s disciplinary record.

“He’s physical, we know that, he’s got a reputation as being reckless, but that’s far from the case,” he said, noting the red card against the All Blacks, another for fighting in a club match and a third in Super Rugby which was quashed on review.

“So we don’t have an issue. He’ll certainly bring an edge and that’s important for us.”

The Wallabies took heart from their spectacular finish in the first Test with three tries in the final 12 minutes and pondered what might have been if Noah Lolesio had avoided a wayward night with the boot, where he missed five of seven shots at goal.

But while they can be expected to improve, so too will the All Blacks, who have focused this week on eliminating penalties – they conceded 18 in the first Test – and not switching off when they have a sizeable lead.

Going into the final quarter, the All Blacks were up 33-8 which underlined how dominant they were when their game clicked.

“While a lot has been said about the things that didn’t go well, there were a lot of things that did go well and we’ve go to make sure we enhance those opportunities again,” Foster said.