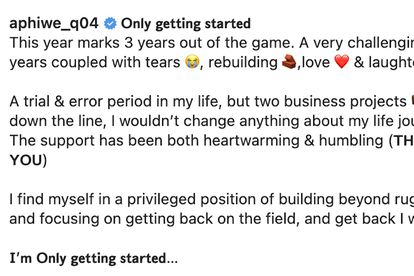 In 2019, and on the eve of the Rugby World Cup, Dyantyi was banned from all forms of the game after his mandatory B sample came back testing positive for three banned substances following a national training camp.

This followed in the wake of the announcement in mid-December when an independent panel handed down the suspension to the Springbok wing after finding that he had ‘failed to satisfy the burden of proof to establish that his positive dope test was not intentional’.

The 27-year-old is entering his third year away from rugby, but has now taken to social media to suggest he will aim to get back on the field.

“This year marks three years out of the game,” Dyantyi wrote. “A very challenging three years coupled with tears, rebuilding, love and laughter.