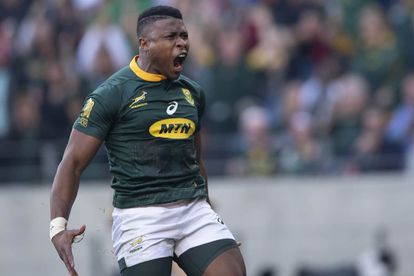 Aphiwe Dyantyi has sensationally been advised by World Rugby that he has the right to lodge his appeal directly with the Court of Arbitration for Sport (CAS) in Switzerland instead of going through the national appeal process.

In January 2021 The South African reported that that Dyantyi had decided to appeal his four-year ban for a doping offence.

This followed shortly after an announcement in mid-December 2020 in which an independent panel handed down the 48-month suspension to the former Springbok wing after finding that he had ‘failed to satisfy the burden of proof to establish that his positive dope test was not intentional’.

Aphiwe Dyantyi had been banned from playing rugby until August 12, 2023 – two weeks before his 29th birthday and only a couple of months before the 2023 Rugby World Cup in France.

The whole Aphiwe Dyantyi doping saga began in mid-2019 shortly before the Springboks departed for the Rugby World Cup in Japan.

Both Dyantyi’s ‘A’ and ‘B’ samples returned positive for no fewer than three banned substances following a national training camp.

However, it’s now been revealed according to SARugbymag, that both Dyantyi and South African Institute for Drug-Free Sport (SAIDS) have been informed that the player can lodge the appeal directly with CAS because, at the time of the test, he was classified as an international athlete under the jurisdiction of World Rugby.

Part of Dyantyi’s defence was that he had unknowingly consumed the banned substances two days before his urine sample was taken when he drank from a friend’s bottle during a gym session.

Dyantyi has played 13 Tests for the Springboks to date.