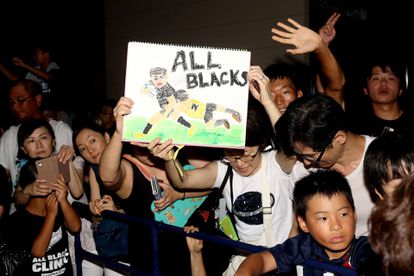 Fans welcome the All Blacks to Kashiwa, Japan ahead of the 2019 Rugby World Cup. Photo: All Blacks/Twitter.

Fans welcome the All Blacks to Kashiwa, Japan ahead of the 2019 Rugby World Cup. Photo: All Blacks/Twitter.

The All Blacks will play Fiji and Tonga in July after the Test schedule was rejigged because of the coronavirus pandemic, New Zealand Rugby announced on Monday.

The three-time world champions were initially due to host two Tests against Italy and one against Fiji in the July international window before the Azzurri pulled out due to concerns about travelling during the pandemic.

Instead, NZR said the All Blacks would stage one Test against Tonga and two against Fiji.

“We look forward to welcoming the Flying Fijians to New Zealand for what will be an historic, first-ever, back-to-back All Blacks Test series against them,” NZR chief executive Mark Robinson said in a statement.

Fiji coach Vern Cotter said he wanted to assemble his strongest possible team and was working out the logistics of getting overseas-based players to the Pacific island nation, which is currently battling a second wave of Covid-19 infections.

“We have been looking at the overseas and also local players and trying to get them back in time for quarantine and training so that we can prepare properly for the first game on the July 10,” Cotter said.

The All Blacks will play Tonga at Auckland’s Mount Smart Stadium on July 3, with the Maori All Blacks v Samoa as a curtain-raiser.

The first All Blacks-Fiji Test is in Dunedin on July 10, with the second in Hamilton a week later.

The Hamilton match will have a Tonga v Samoa Rugby World Cup qualifier as a curtain-raiser.