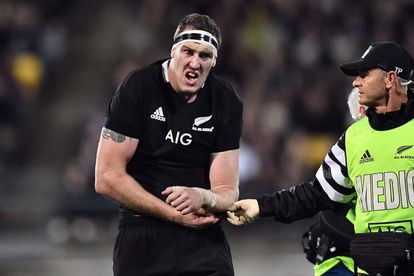 Brodie Retallick, 30, left the field after an hour in Saturday’s convincing victory over Wales as he won his 90th All Blacks cap.

Plumtree’s men face the Azzurri in Rome on Saturday before heading to Ireland on November 13 and France a week later.

“He’s got real good movement now in his shoulder. There’s clearly damage there but we’re going to give him the whole week so he can be right for next week,” he added.

Three players are set to return for the fixture at the Stadio Olimpico in back-rowers Shannon Frizell and Sam Cane as well as hooker Dane Cole.

Blindside flanker Frizell last featured for his country in July after the 27-year-old had criminal charges against him dropped in September after an alleged assault at a nightclub.

“There’s some good competition for Shannon in that position with Akira (Ioane) and Ethan (Blackadder),” Plumtree said.

“I’m sure he’ll be looking to getting out on the park and giving us a reminder of what he can do,” he added.

Former All Blacks captain Cane has been missing with a pectoral issue suffered in March playing for the Blues in Super Rugby Aotearoa.

Versatile front-rower Coles has been out since July with a calf problem but is set for a return against the side ranked 14th in the world and have conceded 227 points in their last five meetings with the All Blacks.

“It’s really important they get up to speed with their games so that they can be in contention for the following two weeks,” Plumtree said.

“The whole thing has been designed around those two being involved this week.

“There will be some younger players amongst them and from a seniority and leadership point of view those two are huge for us.”