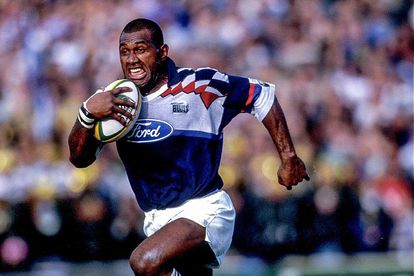 Former All Blacks and Fiji wing Joeli Vidiri has died aged 48, his Super Rugby franchise, the Blues, announced on Friday.

His death came less than 24 hours after the death of another former All Black and Blues winger Va’aiga Tuigamala.

“With heavy hearts we announce the passing of Joeli Vidiri, aged 48,” the Blues said on Twitter.

“G.O.A.T is used frequently these days, more than it should. In the case of Joeli the title truly fits. One of the greatest players of all time.”

Vidiri made seven appearances for Fiji before moving to New Zealand and playing 62 games for the Blues and two Tests in 1998 for the All Blacks.

Joeli Vidiri was an imposing figure in full flight

In full flight Vidiri was an imposing figure with pace and power and for much of his career in New Zealand played alongside Jonah Lomu who is  regarded as the first global superstar of rugby union.

Vidiri’s biography on the All Blacks website says “it is doubtful whether two more imposing figures have ever been together in any side”.

“And especially in the 1996-97 seasons Vidiri was the more effective of the two.”

Like Lomu, Vidiri’s playing career was also cut short by a kidney illness and he retired in 2001.

Tuigamala, affectionately known as ‘Inga the winger’ starred in both rugby union and rugby league.

He earned 19 caps for the All Blacks and represented Samoa in both rugby codes, as well as being a key part of the Wigan team that dominated English domestic rugby league in the early 1990s.