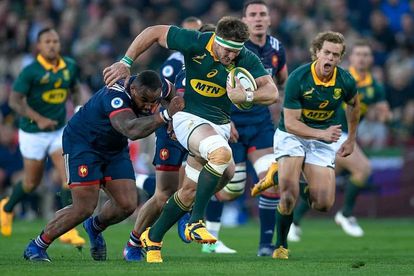 South African international Jaco Kriel, who captained the Lions to successive Super Rugby finals, will be reunited with former coach Johan Ackermann after signing for English Premiership side Gloucester on Monday.

The 28-year-old flanker – capped 11 times since making his debut against Ireland in 2016 – has not played since injuring his shoulder against Australia last September.

Kriel will be unavailable for several months after undergoing a second operation on the shoulder in March.

Despite this Gloucester’s director of rugby David Humphreys said he had been given assurances Kriel would be fit.

“Jaco’s record in his career so far speaks for itself, and he is a player that Johan rates very highly,” Humphreys told the club website.

“He will understand immediately what Johan expects from his players, and the style of play that we are trying to promote.

“Jaco was one of the leading players for the Lions during their development as a squad, and their drive to two Super Rugby finals, and has also been a real star in the Springbok jersey.”

Aside from the two Super Rugby finals – losing 20-3 to the Hurricanes in 2016 and then 25-17 to the Crusaders last year – Kriel also skippered the Golden Lions to Currie Cup success in 2015 when they were coached by Ackermann.

Also read: Speculation that Johan Ackermann will ditch the Lions for Gloucester rumbles on