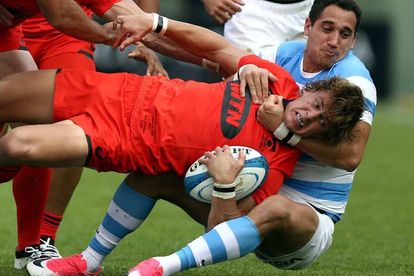 Got to miss the good old days with Hugh Bladen in the commentary box.Joel Stransky putting us to sleep. #ARGvRSA #SSRugby

So the only commentator that they could get to stay sober on Sat night is Joel. #ARGvRSA

Is Joel Stransky and co actually sitting in Supersport offices commentating on this game?#ARGvRSA

Don’t tell Joel Stransky and Robbie Kempson, whatever you do.

OMG there's a word for a tackle like that.

So’s Stransky, except he’s pretending that he’s in Argentina.

Hmm. Blame the jerseys for that.

Chaos for SA from the kick-off as no-one claims it, ball goes loose, and Moyano gathers to score. #ARGvSA #ARGvRSA

Yeah, with his one eye!

Not the most English of names but ok…

Hougaard wanting to have some scones and tea before he clears the rucks. Quicker service needed. #SSRugby #ARGvRSA #Bokke

Slap down to stop a try, eish! Second yellow so a red for Tomas. #ARGvRSA #RugbyChampionship

Haha! Shame he cost his side at least three points, but hey ho.

You’re not from around here, are you?

Wonderful down field kick by King Kolisi. Sign him up Bafana Bafana. #ARGvRSA

Well his medical conditions are no concern of ours.

#Springboks hasn't won a game outside of South Africa since 30th Oct 2015. @coachtoetie must be shitting himself right now. #ARGvRSA

.@springboks seem to pull tries out of very fortunate circumstances as JLduP slides over in the corner for maiden test try #ARGvRSA 23-39

We’ll leave you with this, seeing as everyone’s so bothered!

#ARGvRSA we won but it felt as if I was watching two HS teams at craven week ? that orange, redish kit must never be worn again, we beg!