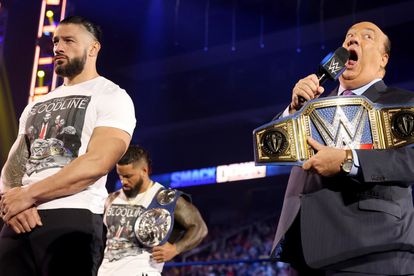 Roman Reigns and the Bloodline, with Paul Heyman in tow, have reacted to popular Tiktok personality Ebukadikeh’s tribute to his interest.

From the comfort of the Island of Relevancy, Reigns took in the tongue-in-cheek video with a broad smile on his face.

No stranger to going viral, Ebukadikeh’s video caught the attention of the WWE and they soon arranged for an appearance from the Tribal Chief himself to take in the young man’s tribute.

Paul Heyman, known to engage fans on social media, also reached out to Ebukadikeh on Twitter.

Roman Reigns was impressed though, delighted that the young TikTok star ‘acknowledged him’.

Reigns set tongues wagging last week when a house show promo was circulated in which the Head of the Table suggested he would no longer be a full time WWE superstar.

“I’ve been here a couple of times in the past 10 years,” the WWE Universal Champion told a packed house in Trenton, New Jersey.

“I’m starting to work into a new phase in my career, and I honestly don’t know if I’ll be back here again. If that’s the case, I just wanna say thank you for all these years of support.”

It has been suggested that Reigns will only be working select TV shows and premium live events in the immediate future.

Wrestling Observer Newsletter’s Dave Meltzer reported: “There was a report that he had agreed to do only the major PPV shows per year, meaning largely the planned stadium shows and Saudi Arabia shows. One person in the promotion with knowledge of the deal said the first report of six wasn’t exactly accurate but close, and his year the number of stadium shows and Saudi Arabia shows would be eight.”