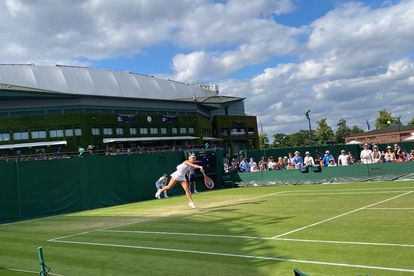 Ruben tragically passed away in 2010 following a long battle with brain cancer, but his legacy remains alive and well, particularly for daughter Isabella, who remains inspired by the the stories of her father.

Isabella recently upset fourth seed Nikola Daubnerova of Slovakia 6-4, 6-7 (4/7), 6-2 in her Wimbledon Girls’ Singles second round match, and is quickly making a name for herself on the international tennis circuit.

“My dad was a rugby player and of course I take a lot of inspiration from him,” Kruger told itftennis.com. “My mum tells me a lot about him and what he achieved during his player career.

“It is incredibly inspiring for me, and I am so honoured to be his daughter. As I say, my mum tells me all the stories of him and how focussed and determined he was, and I am working towards being the same.

“That World Cup is in the history of South Africa, especially with what it meant for apartheid. It was a really special event in South Africa and my dad was a part of it, and I love watching old videos of it. It definitely pushes me to work harder.

“Like my dad, I love representing my country and representing South Africa here at Wimbledon is something I am so proud of. There are quite a few South Africans in the crowd, which I love. I love seeing those Springboks jerseys as I’m a massive fan myself.”

The 17-year-old qualifier will next face British wild card Mingge Xu for a place in the quarter-finals.

“I have been to Wimbledon as a supporter previously and to soak up the atmosphere,” Kruger reflected. “Let me tell you, it is a lot different being here as a player than a fan.

“I was only about seven years old when I came, and I just remember meeting Roger Federer and he was so nice – his mother is also South African. I was so small, but it is such a cool memory of mine that I met him.

“I also remember watching Serena Williams, while Maria Sharapova was also playing at that time, and while from that moment it was always a dream of mine to play here, now I am actually here and experiencing it, the whole thing is just unreal.”