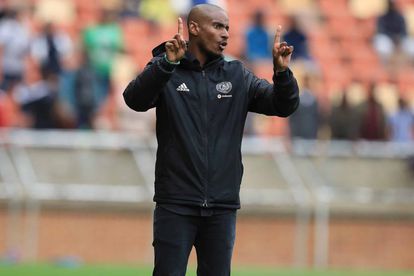 Former Orlando Pirates interim head coach Rhulani Mokwena explained his views on the game and how he likes his teams to play.

Talking to the Modern Soccer Coach podcast, Mokwena was asked about his coaching philosophy and gave an in-depth explanation. The 33-year-old head coach of Chippa United, who has also worked at Mamelodi Sundowns and Orlando Pirates, spoke about his preference for possession football, but also for creating a tactical adaptable team.

Mokwena is structured and demanding of himself

“It resonates with my philosophy as a person. I’m structured and I’m demanding of myself. That resonates in my coaching and playing philosophy. From a mental perspective, that is extremely demanding for players,” Mokwena said.

“I try to teach as much as I possibly can. That includes a lot of video footage, a lot of training sessions, a lot of team meetings where you discuss, with the aid of video technology, pre-arranged tactical agreements.

“I think the main objective is having a clear idea of how you want your team to play. In a pragmatic way, it’s also influenced by the stature, the culture of the club and the quality of the players that you have.

“Once every one is on board it’s easier to sell those to the players.”

The young coach, Mokwena, is said to be on a short-term loan deal from Orlando Pirates, where he is still contracted, to Chippa United. That arrangement appears to have come about as a result of the close relationship between the chairman of the two clubs, Dr. Irvin Khoza and Siviwe “Chippa” Mpengesi.

The Chilli Boys boss has spoken highly of his young coach, saying:

“Coach Rulani comes with lots of experience that he gained from Sundowns and Pirates. He has definitely brought a breath of fresh air to our team.”

After a solid 0-0 draw with Bidvest Wits in his first game in charge, it will be interesting to see how the young coach gets on when the PSL eventually resumes after the coronavirus outbreak and subsequent shutdowns across the football world.

‘What a lame’: DJ Maphorisa claps back at music promoter’s online insults