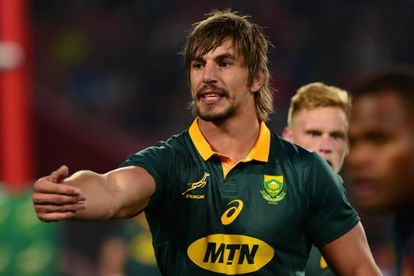 It’s not just the Springboks letting their loyal fans down.

Angry at South Africa’s choice of jersey for their trip to Argentina in the Rugby Championship?

While captain Eben Etzebeth sees a different kind of red for once, check out these costume calamities from around the rugby world to make yourself feel better.

They’ve long been known for their drilled, unimaginative and violent trench warfare… and then the Bulls got this kit, which went down like a carpet bomb with supporters and critics alike on the home front in South Africa.

While there may even be some logic to blending in with your surroundings for that crucial element of surprise over your enemy, that won’t exactly help against a backdrop of thousands of empty blue seats at Loftus Versfeld (oh yes we did!)

Sacre bleu! The French club have long since done away with any notion of Parisian style, fashion or even basic human dignity with a succession of garish outfits in recent years.

Last season’s lurid pink and blue number pales by comparison to the bizzare, Andy Warhol-esqe recreation of a portrait of the wife of King Louis VII in 2008. And that’s to say nothing of the previous bombardment of lilies, faces and goodness knows what else the innocent viewing public endured in the years before that.

If you thought they looked almost sensible last season, you must have missed their change strips, by the way. They had an army of space invaders on them. Mad, absolutely mad.

From provocative in the art world we descend to downright cheeky on all fronts, as the English cooked up an all black change strip just in time for the 2011 World Cup in, yep, New Zealand.

The offensive gesture came as little surprise from the renowned colonialists, but here’s the official reason for the idea: “Revenues from the kit sales will be ploughed back into the grassroots of the game as part of the Rugby Football Union’s £20m-plus investment in the sport each year.”

If you believe that, you’ll believe anything.

Urgh! In an unlikely, unnecessary and unwanted attempt to steal some French thunder, European rivals Edinburgh came up with this explosion in a fireworks factory.

At least it provided a warm glow for those watching rugby practically in the Arctic Circle to huddle around, which is more than can be said for the frostiness of those fake smiles.

Happily for walking advertising boards Calvisano, they had as few gaps in their defence as on their jerseys in 2012 as they romped to the Italian title.

It’s only a shame they couldn’t have put a bit more effort into sartorial elegence rather than mercilessly flogging any old tat while they were at it.

Fisherman falls after hooking a “big one”