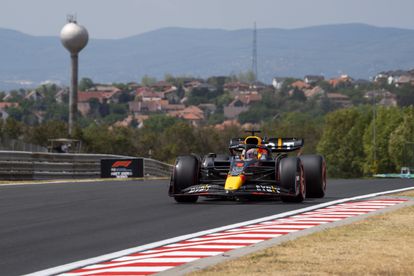 Red Bull driver and World Championship leader Max Verstappen believes that his ride will struggle to keep up in the dry at the Hungaroring after a ‘tricky’ practice.

The reigning world champion is hoping for a wet qualifying session and race.

After the day, Verstappen said: “As expected, it was a bit tricky around here today, we were trying to find the right balance from high to low speed, sometimes it worked and sometimes it didn’t – there’s a bit of work to do. I think the Ferraris will be ahead of us this weekend and it will be hard to beat them. We’ll work hard overnight and try and close that gap as much as we can. The weather looks like it will have an impact on us tomorrow. In the dry we might struggle to compete, but it could be a different story in the rain; who knows, we will see tomorrow.”

Verstappen’s Red Bull teammate Sergio Perez was out to do some recon and wasn’t too phased with being well off the pace.

“We were trying various bits to get comfortable with the car today and I think we have got a good idea and understanding of things, so hopefully tomorrow we will be able to show what we have learned,” Perez said.

“That should transfer to both high and low fuel pace and I am fairly optimistic for the weekend, but the Ferraris certainly look very strong. They are very fast but rain tomorrow could mix things up a bit and we can be up there with them. We must put everything together tomorrow for qualifying and I am looking forward to it.”

With seven wins and a total of nine podiums this season, Verstappen holds a 63-point lead over second-placed Charles Leclerc of Ferrari heading into the Hungarian Grand Prix.