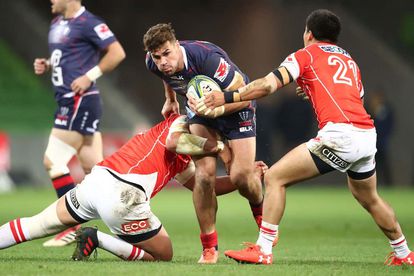 The Melbourne Rebels have joined in on an initiative that strives to eliminate the use of homophobic slurs in junior rugby in Australia.

Recent University studies have shown that homophobic slurs are common in age group level rugby in Australia. Rebels centre Tom English was on hand to explain to young players and coaches the harm that such language can cause.

English told Australia’s ABC: “We’ve attacked the racism stigma, now we’re attacking the homophobic one. When people make those off-the-cuff comments, they don’t think that there’s one person in the room that it may affect.

“Whether it turns that person away from the game or they go home and feel bad or sorry for themselves, that’s not what we’re about in sport and as human beings.”

Following the revelation that former Wales wing Gareth Thomas had been the victim of a homophobic assault last year a number of teams wore rainbow laces in solidarity with both Thomas and the LGBT community.

Australia and South Africa did not offer rainbow laces to their players to wear in November.

Despite the prevalence of homophobic language in age group rugby, the majority of young players surveyed said that they would be comfortable having a gay teammate and were opposed to homophobic bullying. However the study suggests that the behaviour will not be eradicated without a programme of education.

Lead researcher of the Sport Inclusion Project in the Behavioural Sciences Laboratory at Monash, Erik Denison told the Guardian last year: “This language would clearly make young gay people feel unwelcome in sport and it appears heterosexual players also don’t like this language.

“I suspect this language continues because it is self-perpetuating.

“It seems no one is telling the boys to stop using the language, and they aren’t stopping each other, so there is no reason to believe this language will stop on its own until sports take meaningful action.”