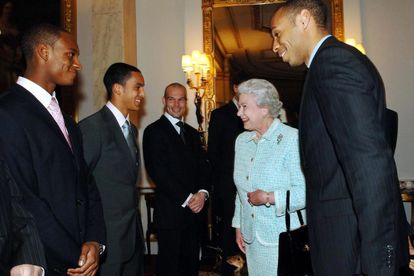 They are still the only football club ever to have been offered this privilege.

Ivorian defender Emmanuel Eboue was always known as a bit of a joker in the dressing room. He didn’t disappoint when he met Queen Elizabeth II.

“We went there and Thierry Henry said to me, ‘Please, Emmanuel, it’s the Queen’s house, don’t do anything’. ‘No problem,’ I said, ‘Don’t worry’. So the Queen came in & went along shaking each player’s hand,”

“After she’d finished, I saw all her corgis so I said, ‘Ma’am, Ma’am’. She turned back & asked, ‘How are you? Ma’am, I am okay thank you, but please, I don’t want to be a footballer anymore, I want to look after your dogs.”

“[I said to the Queen] I want to take them for walks, wash them, feed them. I want to be a dog carer. The Queen, honestly, she was laughing. Prince Philip was laughing too. All the team were laughing!”

What a great story from the archives.

It’s widely expected that Arsenal, Chelsea and Tottenham’s Premier League fixtures this weekend will be postponed as the nation mourns the death of Queen Elizabeth. Confirmation should arrive this morning.