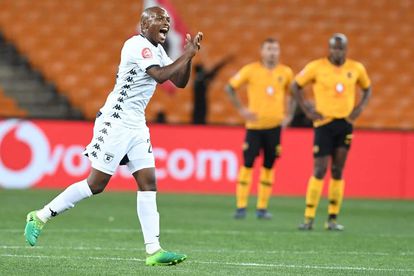 Black Leopards came back from the dead to snatch a heart-stopping draw at Highlands Park on Thursday.

A pair of injury time sucker-punches ensured the battle of the promoted PSL sides ended level in Johannesburg.

It had begun with a pair of wonder-strikes from the men in red at a packed Makhulong Stadium.

Luckyboy Mokoena opened up for the Lions of The North in the 25th minute with an unbelievable volley that crashed in off the crossbar from 30 yards out.

And they thought they’d won it when Ricardo Williams doubled the advantage with three minutes of normal time to play.

Williams waited for a drifting corner to reach him on the edge of the box, before sending the sweetest of volleys into the bottom right-hand corner.

But Lidoda Duvha sprang into life, just in the nick of time.

Substitute Themba Ndlovu bustled through before finding the inside of the near post in the first minute of stoppage time to make for a nervy conclusion.

And the visitors took less than a minute to wipe out the deficit completely.

Another strike from the right came back off the post before Tapuwa Kapini pulled off a reaction stop.

But Mwape Musonda tucked away the loose ball to save a breathless point.

Gaona Modisane’s embarrassing own goal was enough to settle the tie early on, as he prodded back into his own net under no pressure whatsoever.

Mthokozisi Dube was sent off with 20 minutes ago but the hosts couldn’t find a way back.

Harris Tchilimbou put the home side into a 65th-minute lead.

It was two when Goodman Dlamini scored again for the hosts, just after Fortune Makaringe saw red for the Kwa-Zulu Natal side.

Keletso Makgalwa netted an injury time consolation for the visitors.

Bloemfontein Celtic maintained their 100% record thanks to a steady victory away to Golden Arrows.

Tshegofatso Mabaso put the visitors ahead in the 22nd minute.

And Kabelo Dlamini made sure for Steve Komphela’s men just after half time in Durban.

Mpho Kgaswane put the hosts ahead after just six minutes.

Matome Kgoetyane doubled the advantage on 20 minutes before Siphelele Mthembu pulled back a consolation for the Blue and Gold Army.

SuperSport United are off the mark in this season’s PSL thanks to a narrow win over AmaZulu.

Evans Ruskie scored the only goal shortly after half time to seal three points for Matsatsantsa a Pitori.

Bidvest Wits maintained their 100% start to the Premier Soccer League season with a clinical victory at Kaizer Chiefs.

Deon Hotto Kavendji lashed the visitors into a 23rd-minute lead as he beat the dive of Itumeleng Khune from the edge of the box with a speculative effort.

Leonardo Castro pulled level just after the half hour mark at the FNB Stadium.

But the Clever Boys went ahead for the second time just before the break.

Sifiso Hlanti popped up in an advanced position on the left after a set piece, took a neat touch and curled in a beauty of a cross for Terrence Dzvukamanja to head home.

And Chiefs were absolutely nowhere when Gift Motupa made it three less than two minutes after the interval.

Erick Matoho passed up a glorious chance to pull one back ten minutes later.

The Tower planted his free header from six yards out well wide of the right-hand post before shrieking in anguish.

It didn’t get any better from there on in, with Chiefs winless after two games of the PSL season so far.

Mamelodi Sundowns have their first win of the PSL season thanks to a 2-0 success at Polokwane City on Tuesday night.

Pitso Mosimane’s Brazilians went ahead in the 18th minute.

A booming header from Ricardo Nascimento broke the deadlock after a curling cross from the right left the home defence looking dopey at best.

Lebohang Maboe doubled the advantage on 52 minutes as the Brazilians coasted towards their first victory of the season at the second time of asking.