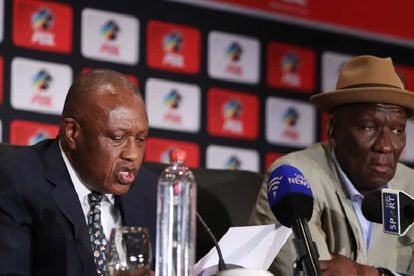 The Premier Soccer League (PSL) has teamed up with the South African Police Services (SAPS) in an effort to crack down on hooliganism in the sport.

Soccer fans have – in recent years – witnessed instances of unruly behaviour from certain sections of the crowd, the most recent of these being the chaotic scenes at Moses Mabhida Stadium that followed Kaizer Chiefs’ exit in the semi-finals of last season’s Nedbank Cup in April this year.

This has prompted the League to rope in the police in launching activities around the country, with the view to reduce violence in communities and in stadiums.

How the PSL and SAPS plan to crack down on hooliganism

“This is an important partnership because it is important for football fans to enjoy the match without feeling threatened,” Khoza said.

Cele revealed that the police will be working to assist the PSL in ensuring that supporters are safe when attending matches.

“We aren’t comfortable with deploying more police personnel at stadiums because we do not want to overpopulate the stadiums. We want the fans to feel safe without overpopulating the stadiums with police presence.”

Cele mentioned the challenge fueled by the consumption of drugs and alcohol in stadiums and said they will be rolling out a system to monitor it.

This was echoed by Khoza, who said they want to turn stadiums into family-friendly places.

“So we need to eradicate certain people abusing alcohol and drugs in public places such as stadiums,” he said.

“The biggest failure of our country is that we are failing to manage ourselves, so we have come up with this partnership to mitigate criminal behaviour to make our stadiums safer.”

Violence on the increase in SA stadiums

Unruly behaviour from the crowd has been a frequent occurrence in the last two seasons, dating back to February last year when Orlando Pirates fans invaded the pitch during a league game against Mamelodi Sundowns, where the Buccaneers were thumped 6-0 at Loftus Versfeld.

In April this year, former Kaizer Chiefs coach Steve Komphela had to be shielded as angry fans hurled missiles in his direction, following the Soweto giants’ 3-0 defeat to Chippa United at FNB Stadium.

This was followed weeks later by the Nedbank Cup debacle, where damage amounting to R2.6 million was recorded at Moses Mabhida Stadium, following Chiefs’ 2-0 loss to Free State Stars in the Nedbank Cup semi-final.