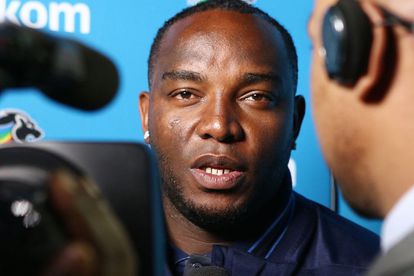 In his short stint as head coach of a top-flight team, Benni McCarthy has ever-so-often demonstrated that he is willing to protect his players, and has called on match officials to do the same.

The Bafana legend’s Cape Town City suffered a 1-0 defeat to AmaZulu at King Zwelithini Stadium, thanks to a superbly taken free-kick from Tapelo Nyongo in the second half.

However, the home side’s hero on the day dished out a crunching tackle on City winger, Craig Martin earlier in the contest – prompting a reaction from McCarthy, who felt that the challenge warranted a sending off.

“You can’t give life-threatening tackles to players. Every single match I’m one player short through injury,” he said after the match.

“Players just get warnings. When do [the match officials] want to take action – when a player can’t kick the ball anymore? The f***ing players get yellow cards for it. I’m getting sick and tired.

“Nyongo scored the goal, fantastic free-kick, but he shouldn’t have been on the pitch because he could have broken Craig’s leg, and then that’s his career finished. It’s every single week, the same.

“When a coach speaks out then you get called to the arbitration, then you have to pay fines. I see the Black Leopards coach (Dylan Kerr), has to pay a fine, just for asking that the referees be a little more consistent to protect players more. It’s tough…when you lose its worse!”

The defeat sees no movement in terms of log position for City, who remain fourth – just seven points away from the table-topping Bidvest Wits.

They next host Highlands Park in the Nedbank Cup on Friday before welcoming bottom-feeders to Cape Town Stadium when the league resumes.