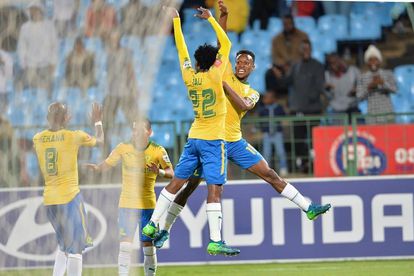 Mamelodi Sundowns will be officially crowned as PSL champions at Dr Molemela Stadium on Saturday, but not before the small matter of a 90-minute tussle against local side, Bloemfontein Celtic.

The men from Pretoria clinched a record eighth title, when they overcame Ajax Cape Town at Loftus Versfeld, in the penultimate game of the league campaign, and now go into the final fixture with not much to play for, except capping off a stellar season on a winning note.

Coach, Pitso Mosimane is likely to rest some of his key players, as his side’s season is far from over, as they are still engaged in the CAF Champions League, not to mention the high-profile exhibition match against Spanish giants, Barcelona, where they will want to give it their all.

One man likely to get a shot at selection is former Kaizer Chiefs man, George Lebese, who has struggled to break into the star-studded starting lineup since making a move from the Soweto giants at the start of the season.

For Celtic, it’s business as usual as they look to secure a much coveted spot in the league’s top eight.

Phunya Selesele are currently sitting at ninth place, tied on 36 points with Chippa United, who are directly above them.

They are currently in a bit of a bother, as they have gone five matches without so much as a win – last tasting victory in March against the relegated Platinum Stars.

The hosts will be eyeing revenge, having been thumped in the reverse fixture, where they went down 4-1 at Loftus.

Unsurprisingly, Sundowns have been the more dominant side in recent encounters between these two sides, winning six of the last 10, with Celtic winning three – most memorably handing them a 5-0 thumping in Pretoria back in 2015.

It will be broadcast live on Supersport 4, with the live build-up starting at 14:00.