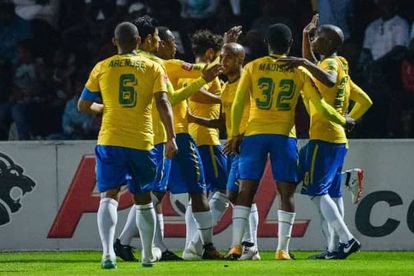 Mamelodi Sundowns were the big winners on Tuesday night as they put four unanswered goals past log leaders Baroka FC at the Lucas Moripe stadium.

This meant that the visitors were finally unseated from the top of the table as the two sides went into this clash with just three points separating them.

The Pretoria side signalled their intentions early on when they took the lead within two minutes from kick off, courtesy of a spot kick that was calmly slotted in by Motjeka Madisha. This was followed by a frantic passage of play as Baroka immediately looked for an equaliser as the next goal also went Sundowns’ way through Themba Zwane, nudged one in from close range after excellent service from man of the match, Percy Tau.

After the break, it was Tau’s turn to get on the scoresheet as he slotted one in in the 47th minute, and with just 20 minutes from the final whistle, he added another one to complete his brace and cap off an amazing performance.

In what was – on paper – the night’s biggest clash, neither Orlando Pirates nor Supersport United could find the back of the net as they settled for a share of the spoils in a goalless draw at the Orlando stadium.

It was not a match without chances as players from either side wasted a few opportunities, Jeremy Brokie and Thamsanqa Gabuza the biggest culprits in the opening moments of the game.

Pirates were in the opposition half more often in the second half but couldn’t make it count as Thabiso Kutumela, Luvuyo Memela and Mpho Makola wasted glaring opportunities to hand the home side the three points they needed to top the log.

Earlier in the day, “homeground” advantage counted for nothing for the temporarily Durban-based Cape Town City FC as they went down 4-2 to Maritzburg United at Princess Magogo Stadium.

After the first half ended Benni McCarthy’s men one goal to the good courtesy of Sibusiso Masina, Maritzburg opened the floodgates in the second half with Pagiso Sanoka kicking off the onslaught with a 55th minute strike.

Mohau Mokate followed that equaliser with a quick brace and his side were 3-1 up in the 68th minute.

With two minutes to the final whistle, second half substitute Lyle Lackay brought City within just one goal off a stalemate but Siphesihle Ndlovu would restore that two-goal advantage right at the final whistle.