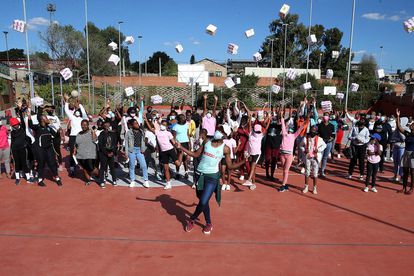 At the recently-concluded Commonwealth Games, Msomi had the honour of serving as one of Team South Africa’s flag-bearers during the memorable opening ceremony.

It was a decision based on Msomi’s remarkable contribution to the sport of netball during an illustrious career, but also due reward for an athlete who continues to make an inspiring impact off the court.

For those who may not be familiar with the Bongi Msomi story, she grew up in the township of Hammarsdale in Kwa-Zulu-Natal in South Africa, and is the fifth of eight children in her family. She started playing netball at the age of 16, a chance encounter when she was asked to fill in while she was watching her friends play. She didn’t have any training kit or trainers, but immediately made an impression on the coach and was asked to come back the following week. As they would say, the rest is history.

She climbed through the netball ranks and went on to make her debut for South Africa at the age of 23 in 2011. She continued to make an impression on the international stage and was awarded the captaincy armband in 2016, a proud moment and a dream come true. She led the Proteas to their most successful Netball World Cup performance in 2019, a fourth-place finish in an inspiring performance which helped to raise the profile of the sport in South Africa and the world.

Msomi is poised to lead the team when South Africa hosts the Netball World Cup for the first time in its history in Cape Town in 2023, with the team hoping to bounce back after a somewhat disappointing finish at the Commonwealth Games.

The 34-year-old remains a key member of the Proteas netball team, but it’s her achievements away from the game that ensures her legacy transcends on-court success.

Msomi’s difficult upbringing marred with poverty, lack of resources and opportunities inspired her to start the Bongi Msomi Legacy Project, which is based in her hometown of Hammarsdale. The Legacy Project provides funding, kit, travelling expenses and food to young netball players in the impoverished community.

Msomi says she wanted to give back to her community and provide a source of inspiration and hope for the many young girls and women in her community, while she hopes netball can give her players the same opportunities and resources that it gave to her.

“I am a product of someone who was fully supported through my sporting journey (through financial support, coaching or mentorship) from school to where I am today,” she says. “I know exactly what this does to an athlete as it is something I will forever strive to do in hope of changing someone’s life for the better. I honestly believe mine did. There is a number of athletes out there who have the talent and just need guidance and motivation and I can only imagine if they could get the support from the people they look up to, what that can do!

“The knowledge and experience the athletes gain in their journey is priceless. Sharing these, together with all the stories, challenges, and their struggles sends a true reflection of what being an athlete is to the generations to come.

“This is the reason I started the Bongi Msomi Legacy Project and whether we were funded or not, I was going to start it, because at the end of the day, it is my responsibility to guide and groom the next generation.”

Among Msomi’s multiple accolades, she has been announced as African Athlete Ambassador by World Netball, and remains passionate about ensuring she can continue to lead by example.

“I have never participated in sport to be recognised but to enjoy what I am doing and making sure I do it with integrity, honesty and respect, whether that is in netball or my personal life. I also understand that hard work and dedication is required in all that I do, if I want to be the best version of myself. I have been fortunate enough to be able to stick to my principles and character throughout my journey which is not always easy but always felt it is the right thing to do.”

Msomi plays as a centre or wing attack for South Africa

Msomi has already laid a foundation to ensure she continues to make a meaningful impact even after she retires from the game, but there are still some significant on-court goals that have been set.

Of course, the 2023 Netball World Cup now looms on the horizon, and represents another opportunity for Msomi to cement her status as one of the greatest players to have ever laced up her shoes for South Africa.

“We are excited about the World Cup being hosted in our own backyard. Feeling pressure is normal. We understand the magnitude of the event being hosted in our home soil. With the sponsors coming on board, assisting us in certain aspects of our preparations (which is highly required), it is the commitment and hard work that we are willing to give to ensure that we well prepared when the time comes. We can’t wait!”