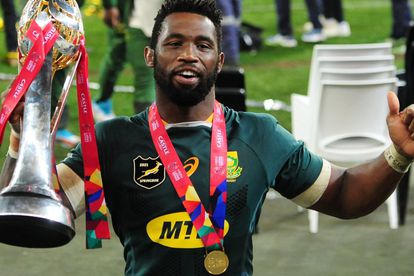 On Sunday night (American time), Kolisi will appear on award-winning TV show ’60 Minutes’, which is celebrated as the most successful television broadcast in history. Offering hard-hitting investigative reports, interviews, feature segments and profiles of people in the news, the broadcast began in 1968 and is still a hit, over 50 seasons later, regularly making Nielsen’s Top 10.

According to a show preview: “on post-apartheid South Africa, the national rugby team’s first Black captain, Siya Kolisi, is keenly aware of the challenges of transforming the team. Sunday, Jon Wertheim meets Kolisi & sees how he uses sport to help bind a country still riven by inequality & racial divisions”.

In the Twitter teaser to the show, Kolisi says he will explain how Nelson Mandela envisaged sport as a tool to unite the country.

The show will air for the first time during what will be the early hours of Sunday morning in South Africa, and is expected to be available to viewers throughout this week.

WHERE: CBS and online at 60minutes.com.

The Springboks currently find themselves in third place in the latest World Rugby rankings following the conclusion of the 2022 Rugby Championship.

Tournament winners, the All Blacks, are in fourth.

Ireland continue to lead the way ahead of France, while Australia have plummeted to a lowly ninth place, below Argentina who finished bottom of the Rugby Championship log.