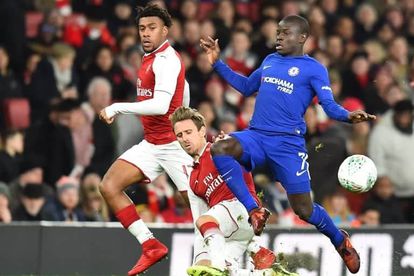 Premier League fixtures on Friday, 4 May

All kick off times are SAST.

The Red Devils head to the Amex Stadium hoping to avoid yet another loss to a promoted side in one season having already lost to Newcastle United and Huddersfield Town. But Friday night’s action should see United continue their stronghold over the hosts in all competitions which has seen them win all four games without conceding a goal.

Premier League fixtures on Saturday, 5 May

The pressure is on as the hosts hover dangerously in second last. Adding to their dilemma is the matter of only having won two of their last meetings against Palace. But the Potters are in a good space after securing a point following the goalless draw against the high-flying Reds last weekend, which captain Ryan Shawcross described as a win at this stage of the season.

Both teams will be hoping to bounce back after defeats last weekend. The Hornets went down 2-0 to Spurs and Newcastle suffered a 1-0 defeat to West Brom. Both comfortably placed mid-table, it will be interesting to see if the visitors can secure their first top-flight win at Vicarage Road.

The Baggies might not have secured the chop, but if anything, they have managed to ruffle a few feathers this season. Their win against United stands out as well as a 2-2 draw against Liverpool not too long ago. Spurs will be hoping to pull away from Chelsea as the race for that top-four spot intensifies.

The Swans, currently occupying 17th spot, desperately need three points with only a point separating them from Southampton who are on 32 points and in third last. They are also winless in six league matches and have been unable to get the better of the Cherries during five previous attempts.

The Foxes have struggled with only one win from their last four games while the Hammers will be hoping to restore some pride after a 4-1 mauling at the hands of the champions City. Leicester City have however won all six of their previous league encounters against West Ham who won’t be sleeping easily only three points from safety as it stands.

The Saints won’t have an easy time against the hosts who are unbeaten in four games. But Southampton will be drawing on the memories of their last encounter which they won 4-1. They will be relying on Charlie Austin, who has scored in each of his matches against the Toffees, to once again find the back of the net while the hosts hope that Wayne Rooney can end his drought spanning 15 league games.

Premier League fixtures on Sunday, 6 May

If Manchester City win, it will be their 31st victory of the season and it will take them to 96 points, both of which will be records for a single team in a Premier League campaign. Huddersfield Town will travel to the Etihad for only the second time having lost 1-5 in an FA Cup fifth round replay last season despite taking the lead.

Will the visiting Reds, who secured their first Champions League final spot in more than a decade, be able to find enough motivation following their midweek antics against Roma? Their opponents most certainly will as they continue to chase down Spurs who should secure another three points against bottom-placed West Brom.

It’s No 6 versus No 7 when the Gunners host Burnley in what will be outgoing manager Arsene Wenger’s final home game at the Emirates. Arsenal have needed the full 90 minutes to produce their last three wins against Burnley with Alexis Sanchez scoring a last-gasp penalty in their 1-0 victory last November.