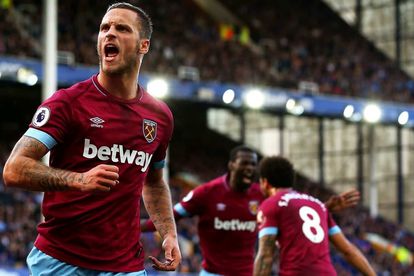 West Ham ended their losing start to the Premier League season with a shock win at Everton on Sunday.

An Andriy Yarmolenko brace on his full debut gave Manuel Pellegrini’s side the impetus to snatch their first points of the campaign on Merseyside.

The Hammers took a shock lead after the hosts gave away possession in midfield.

Marko Arnautovic beat the offside trap before unselfishly squaring for Yarmolenko, who slotted past Jordan Pickford on 11 minutes.

While the England keeper was blameless there, he wasn’t 20 minutes later.

His dud clearance came all the way back to Yarmolenko, who cut across the box before picking out the top left-hand corner.

Gylfi Sigurdsson then offered some sort of salvation on the stroke of half time, heading powerfully in from a Jonjoe Kenny cross.

It showed team-mate Cenk Tosun how to do it, with the Turk missing a far easier chance of his own earlier in the half.

Marco Silva’s side continued to push after the break, with a boisterous Goodison Park crowd suddenly behind them.

But it came to nothing as Arnautovic exchanged passes with Pedro Obiang before slotting past Pickford on the hour mark.

Substitute Oumar Niasse clattered the crossbar from six yards out when it looked easier to score on 84 minutes.

And that was as close as the hosts could get, as the visitors headed back to London with all three points.

Wolves somehow only beat Burnley by the odd goal on Sunday, despite dominating from start to finish at Molineux.

The hosts came flying out of the traps and visiting keeper Joe Hart had to be out sharpish to deny Willy Boly in the 12th minute.

Hart was also called upon to make a pair of saves, the first from Raul Jimenez, with James Tarkowski clearing off the line in between.

Boly then fired inches over on the brink of half time, as the Clarets somehow remained level.

The one-way traffic continued after the break when Jimenez somehow blazed over from close range, before Hart palmed a Ruben Neves shot around the post just before the hour mark.

But Wolves finally made the pressure tell on 61 minutes when Jimenez picked out the bottom corner from Matt Doherty’s centre.

Sean Dyche’s side looked well off the pace throughout, as the Black Country club continued their impressive return to the top flight.

First half goals from Romelu Lukaku and Chris Smalling saw Jose Mourinho’s side home in Hertfordshire, despite Andre Gray’s second half effort.

Ben Foster had to be out smartly to thwart Lukaku in the opening exchanges.

Opposite number David de Gea had to match Foster at the other end when he tipped over from Troy Deeney.

And Foster continued the theme when he threw out a hand to deny Alexis Sanchez’s rising shot following a mazy run in the 31st minute.

But he was powerless to prevent Lukaku diverting ex-Hornet Ashley Young’s searching delivery into the Watford net four minutes later.

The lead was doubled in double-quick time when Marouane Fellaini’s header into the box was chested and hooked in by Smalling.

Gray caused a stir around Vicarage Road when he forced one back on 65 minutes.

But the onslaught never quite materialized as United played out time comfortably enough, despite Nemanja Matic’s late sending off for a second yellow card after a clumsy challenge on Will Hughes.

Manchester City breezed past Fulham at the Etihad Stadium, keeping their title defence firmly on track.

Leroy Sane ensured the EPL kings got off to the perfect start when he tapped in after Fernandinho burst on to a loose pass in midfield before squaring in a flash to the young German.

City almost had their second when Raheem Sterling’s effort bounced away off the crossbar thanks to a deflection off the well-spread Marcus Bettinelli.

David Silva’s shot also hit the bar in the 21st minute before bouncing down and into the back of the net for goal number two.

It was mostly City but not all, as Andre Schurrle forced a pair of saves from home keeper Ederson.

But Bettinelli had to be equally sharp at the other end to deny Sterling, seconds before Sane had his second chalked off thanks to an offside flag.

The second half began exactly as the first, this time with Sterling popping in Sergio Aguero’s centre from three yards out.

And that was enough as Pep Guardiola’s hosts slipped down into second gear, with their UEFA Champions League campaign starting in midweek.

Chelsea stormed back from a goal down against Cardiff, thanks largely to an Eden Hazard hat-trick.

The visitors stunned Stamford Bridge in the 16th minute when Sol Bamba sneaked in to poke past Kepa Arrizabalaga from close range.

But the Blues were level before the break as Hazard arrowed a low drive perfectly into the bottom left-hand corner.

The turnaround was complete when the Belgian bundled in his second following good work from Marcos Alonso.

And Hazard notched his hat-trick from the penalty spot after Bamba’s afternoon took a turn for the worse.

The defender’s hopeless pursuit of Willian ended in abject failure – and with the attacker on the floor before Hazard swept in to collect the match ball.

Willian had one of his own soon after when he curled in from just outside the area to make it four.

Arsenal made it three wins on the bounce with a hard-fought success at Newcastle.

The Gunners atoned for a dismal first half showing thanks to a moment of individual brilliance.

The second wasn’t long in coming as Mesut Ozil knocked in a smart, side-footed shot from inside the area.

Ciaran Clark was on hand to pull one back for Rafa Benitez’s hosts in the closing minutes.

But the Londoners hung on to seal a valuable victory for Unai Emery over his countryman.

Liverpool grabbed all three points against Tottenham at White Hart Lane on Saturday thanks to goals by Gini Wijnaldum and Roberto Firmino.

A late strike from Érik Lamela gave Spurs a brief spark of life towards the end, but it wasn’t enough to pull off a comeback.

The visitors should have been ahead in the first minute, only for Roberto Firmino’s near-post finish to be chalked off thanks to a dodgy linesman’s flag for offside against Sadio Mane.

Mohamed Salah then duffed his shot after being set free by a shocking Eric Dier pass inside his own half.

Spurs grew surer as time went on, although they breathed a sigh of relief when a Mane foray on 35 minutes only led to a tame finish.

And the Reds were ahead four minutes later as Gini Wijnaldum’s stretching header at the far post sneaked over the line before being pawed away by Michel Vorm.

Vertonghen failed to clear Mane’s cross and Vorm, lying on the floor, could only watch as the Brazilian poked home.

Lamela’s consolation goal came three minutes into stoppage time, but the Reds held their nerve for all three points.

Bournemouth produced a first half blitz to stun Leicester at the Vitality Stadium.

The Cherries went ahead on 19 minutes when Ryan Fraser deftly cut a swathe through the Leicester defence before picking out the bottom corner.

Asmir Begovic was on hand to deny Jamie Vardy, before making enough contact to divert James Maddison’s follow-up on to the crossbar.

His heroics were backed up on 37 minutes when Fraser nestled in his second after being played in by Callum Wilson.

And Josh King made it three from the penalty spot before half time after an innocuous handball in the Leicester box.

It went from bad to worse as Wes Morgan was shown a second yellow card for a lurching tackle after losing possession.

Adam Smith then finished on the counter as Eddie Howe’s men went from strength to strength, despite Maddison’s late penalty consolation and Marc Albrighton’s sucker-punch.

Steve Mounie headed over a presentable chance early on for the Terriers.

And the Yorkshire side went behind as Wilfried Zaha was allowed to drift in from the right, before the Palace star picked out the top right-hand corner with a curling finish.

There was no way back for David Wagner’s goal-shy minnows, who continue their slide towards the bottom of the pile.

Beckham does Mariah: Icon sings “All I want for Christmas is You” [Video]