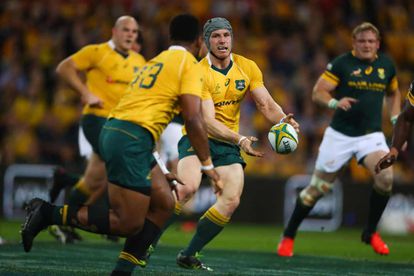 David Pocock passes the ball during the Rugby Championship match between Australia and South Africa at Suncorp Stadium in Brisbane on September 10, 2016. / AFP / Patrick HAMILTON

David Pocock passes the ball during the Rugby Championship match between Australia and South Africa at Suncorp Stadium in Brisbane on September 10, 2016. / AFP / Patrick HAMILTON

Rugby Australia are taking no risks with veteran flanker David Pocock in a bid to ensure he is fit for the Rugby World Cup in Japan.

Pocock shelved the Super Rugby season, earlier this year, after aggravating a calf injury during a Wallabies training camp in January 2019.

Michael Cheika will name a 31-man squad for the trip to Ellis Park this week. The Wallabies leave for South Africa at the weekend, a week early, to endure a training camp at altitude prior to the opening week of Rugby Championship action.

Cheika’s side clash with the Springboks in Johannesburg on 21 July in the first clash of a shortened Rugby Championship. That opener is followed by clashes against Argentina (Brisbane, July 27) and two against the All Blacks in Perth (August 10) and Auckland (August 17). The match at Eden Park will not form part of the Championship but will be a Bledisloe Cup Test.

Skipper Michael Hooper won’t face any pressure from Pocock for his number 7 jersey but the team could certainly do with an improved display on the international scene after a dismal 2018.

In an interview with the Sydney Morning Herald, Hooper said the team were ready to fight for the honour of playing for Australia.

“Australians love an underdog and we are fighters. This stuff does callous you to a certain extent,” he said.

“We’ve had to learn to deal with press, results not being in our favour, and we’re still here in the arena, doing it every week. That’s something to play for and something for the players and hopefully our fans to get behind.”

The Wallabies have been boosted by the news that 29-year-old utlitity back James O’Connor is to return to Australia in a bid to earn a Wallabies recall.

O’Connor is understood to be seeking a deal in Super Rugby and could also turn out for Australia’s Sevens outfit. He played the last of his 44 Tests for Australia in 2013, leaving for a career in Europe on a sour note.