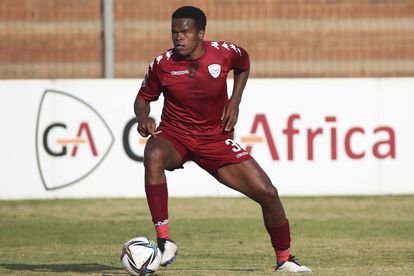 Sekhukhune United continued their impressive start to the 2021/22 DStv Premiership season with victory over AmaZulu on Wednesday. ©Gavin Barker/BackpagePix

Sekhukhune United continued their impressive start to the 2021/22 DStv Premiership season with victory over AmaZulu on Wednesday. ©Gavin Barker/BackpagePix

Sekhukhune United midfielder Willard Katsande has revealed his business venture outside of his football career.

READ | KAIZER CHIEFS AND ORLANDO PIRATES IDENTIFY SAME MIDFIELD TARGET, BUT WHO WILL GET HIM?

Fresh from netting his first goal for Sekhukhune, pictures have emerged on the internet of Katsande as never seen before!

Katsande has had a solid career in the DStv Premiership

Katsande has enjoyed a distinguished footballing career in South Africa since arriving in the country from Zimbabwe. The former Zimbabwe international turned out for Ajax Cape Town (Now Cape Town Spurs) before signing for Kaizer Chiefs. After spending a decade at Naturena, he was released by the club and subsequently ended up signing with DStv Premiership new boys, Sekhukhune.

READ | BIG NAME ORLANDO PIRATES PLAYERS IN DANGER OF GETTING THE CHOP, WITH THE CLUB LOOKING TO CRACK DOWN ON ILL DISCIPLINE!

At 35, however, Katsande understands that his days as a professional footballer, at least at the very top, are numbered. “Boss Ya Mboka” as he is affectionately known on the social media streets, is also known for his fashion sense, so maybe it would then be expected that should he venture into a business after football, it would be a fashion-orientated one.

However, that doesn’t seem to be the case for Katsande, well at least not as of yet. The tough tackling midfielder has instead revealed that he has ventured into a plumbing business.

“I can say it’s a new business now, but I registered the company in 2017. But I was still learning, now I’m busy working. It is operating full time now. We are doing a lot of work, from home renovations, interior and exteriors, handyman services such as bathroom fittings, kitchen fittings and ceilings”. Katsande told SunSport

Katsande’s business employs eight people as it stands and he reveals this is nothing new to him.

READ | ISAAC MABOTSA : LUCKY MASELESELE WAS KILLED BY HIS FRIENDS”

“I have been business minded since I was young, growing up in my rural area (Mutoko in Zimbabwe I would go to town and buy 50kg’s of sugar and come back and sell it in cups at an affordable price for people in the village, to make money”.

His motivation behind it

Katsande then reveals his motivation for starting his business venture.

“I’m doing this for a better future for my family and kids. My football career will end, and I still need to provide for them. Also, I’m doing this to inspire people”.

Here are the pictures below courtesy of SunSport: