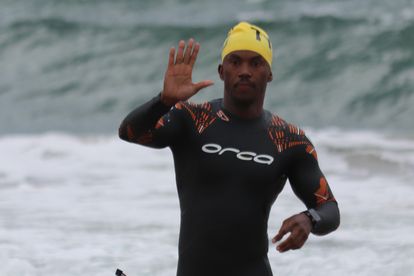 Current national paratriathlon champion Mhlengi Gwala will use the Consol Breathe World Oceans Day Swim as part of his training as he prepares for some big international events later in the year.

Current national paratriathlon champion Mhlengi Gwala will use the Consol Breathe World Oceans Day Swim as part of his training as he prepares for some big international events later in the year.

One of South Africa’s premier paratriathletes Mhlengi Gwala has confirmed that he’ll be on the start line for the Consol Breathe World Oceans Day Swim on 4 June at Vetch’s Beach.

Gwala had his right leg amputated at the knee following a horrific attack in 2018 while he was breaking onto the able-bodied triathlon scene; but despite the amputation he is still as determined as ever to continue to follow his dream.

As a Durban-based star who has spent a lot of time swimming in the waters off the coast of Durban, he is looking forward to taking part in the World Oceans Day Swim.

“I love swimming in the ocean and I find it so much easier than swimming in a pool,” Gwala said.

“To have races in our ocean makes training a lot more fun for me and I am going to be swimming in the 1.6km race because that’s the right distance for me.

“Having a chance to train in racing conditions is fantastic and to support a good cause at the same time makes the event that much better.”

The Asics/Roc Nation athlete is currently in preparation for the Paratriathlon World Championships in Abu Dhabi in November as well as the African Championships in September so any action he can get at the moment will be positive.

“I am battling to get my visa to travel to Spain for the next leg of the series so I am just training as hard as I can.

“I’ve started working with Graham Hill so I am swimming five days a week between 3km and 3.7km per day which has been going well.

“I am hoping that I can race internationally at some stage this year before the World Championships,” Gwala added.

Having such good swimming conditions in his own back yard is a bonus for Gwala as he continues to improve his first discipline of the triathlon.

“The water is always warm and the conditions are always so good in winter so you can still do a lot of swimming training in the sea.

“I always like it that you can swim from the harbour to the river mouth and not have to worry about what’s under the water,” he laughed.

The Consol Breathe World Oceans Day Swim takes place on 4 June and entries are open and available at breatheconservation.org.