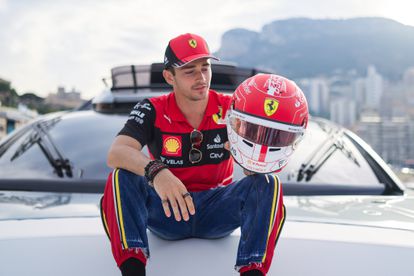 The 24-year-old Monegasque driver, who was also quickest in the opening session, clocked a best lap in one minute and 12.656 seconds to outpace the Spaniard by just 0.044 seconds, leaving the two Red Bulls of Sergio Perez and world champion Max Verstappen third and fourth, more than three-tenths adrift.

Lando Norris, still battling tonsilitis, was fifth for McLaren ahead of George Russell of Mercedes and Pierre Gasly, an impressive seventh for the Alpha Tauri team on a very warm afternoon in the Mediterranean principality.

Two-time champion Fernando Alonso was eighth for Alpine ahead of four-time champion Sebastian Vettel of Aston Martin and Yuki Tsunoda in the second Alpha Tauri.

This left a disgruntled Lewis Hamilton down in 12th, behind Kevin Magnussen’s Haas, in the second Mercedes, the seven-time champion struggling with continued bouncing as he sought a set-up that would be comfortable and fast.

The session was interrupted once by a red flag when Daniel Ricciardo crashed in the Swimming Pool complex, emerging unscathed from his damaged McLaren.

Charles Leclerc second in the standings

After topping the times in the opening session, Leclerc was quickly back on the pace in his Ferrari, running on hard tyres, as he sought to become the first Monegasque to score points at home since Louis Chiron finished third in 1950 and regain the lead in this year’s drivers’ championship.

After his third consecutive win in Spain last Sunday, Dutchman Verstappen leads on 110 points, six ahead of Charles Leclerc.

In a fast-switching contest between them, the Red Bulls and Ferraris were within two-tenths of a second of each other as Russell and the rest bumped in pursuit, Mercedes still searching for a successful set-up.

He explained it was not the same ‘porpoising’ as seen earlier this year, but a ride height problem.

“Sometimes, it is a combination of aerodynamics and stiffness, but this is just due to the stiffness,” he said, adding that Hamilton had requested padding for his elbows for the second session.

“We’ll try to make it more enjoyable for them, but we want a fast car,” he said.

“If it’s fast, we will make him all the pads he needs.”

Ricciardo delivered another example of the bumpy challenge the drivers faced after 14 minutes when he lost control of his McLaren and smacked into the barriers at the ‘swimming pool’ complex.

He was unhurt but his car suffered severe front damage, ending his participation. A seven-minute delay for the day’s second red flag ensued before Valtteri Bottas, back in action after earlier gearbox problems, led the field back in his Alfa Romeo.

The pause offered all involved a chance to breathe and relax in the heat, with an air temperature of 30 degrees and the track at 53, before returning to an intense ‘qualifying rehearsal’ scrap.

Charles Leclerc continued to look dominant, trimming his lap to 1:12.656, three-tenths clear of an improved Perez before Sainz climbed back to second, two-tenths off the pace.

At this point, with 20 minutes to go, Ferrari were on top of Red Bull’s challenge, while others scrambled and scraped. Russell clipped the barriers at Tabac, Norris did the same at Ste Devote and Hamilton locked up at Mirabeau – three Britons sliding in the heat before switching to longer high fuel-load running.

Leclerc was notable for his absence with 12 minutes remaining, but he returned for the final six to complete a solid day’s work by the ‘scarlet Scuderia’ who finished with a strong one-two.