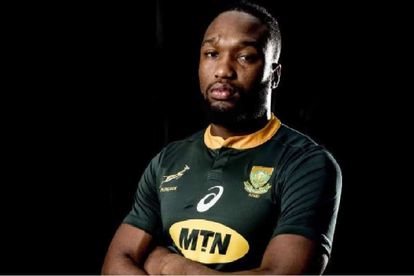 The new-look Springboks team, in their new kit, has made history where ever they went so far in the 2018 season, so it was no surprise that big brands would also want in on the occasion.

The first Test at Ellis Park saw a momentous occasion, when the men in green and gold were – for the first time ever – lead out by a black player in Siya Kolisi, and in the second encounter in Bloem, veteran prop, Tendai “Beast” Mtawarira is also set to etch his name into Bok folklore when he becomes the first black African to reach the 100th Test mark.

It was expected that a sports equipment retailer, Sportsmans Warehouse would want to cash in, but it didn’t really go as planned.

In a Tweet posted on Friday, ahead of the do or die weekend encounter, the retailer said all the right things, only to mess it up with the image, using none of the two history makers mentioned, but that of rookie center, Lukhanyo Am.

As expected, their gaffe did not exactly go down well in the *cringe* Twittersphere, as they were quickly called into order.

Did you intend to put Lukhanyo Am as the photo?

do you know who is in this picture at least?

Did you intend to put Lukhanyo Am as the photo?