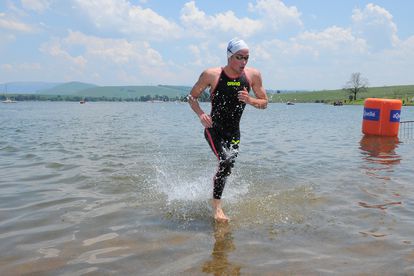 The 49th edition of the Midmar Mile crowned two first-time champions on Sunday as Stephanie Houtman and Connor Buck emerged victorious in the elite races.

Just a week ago, Houtman wasn’t even planning to compete but made the last-minute decision to head to the famous KwaZulu-Natal dam for the event.

It was Tory Earle who took an early lead in the women’s race, reaching the 400m and halfway points in front. But Houtman steadily worked her way to the front by the 1 200m mark and powered ahead to win in 19 minutes 37 seconds.

Finishing 13 seconds back was her TUKS training partner Samantha Randle, with 17-year-old Mykae Forrest hot on her heels in 19:51.

“It was a good race. I was actually really happy with it,” said an elated Houtman afterwards.

“Towards the start it was very bundled, everyone was on top of each other and then towards the first buoy everyone started spreading out and I started finding my rhythm and I just went for it.

“A week ago I wasn’t actually going to come but then Wayne [Riddin] persuaded me to come and just to see what happened. So we decided to fly down yesterday and come and swim.”

By the time he reached the finish in 18:18, he was a remarkable one minute and 20 seconds in front of McGlynn who took second spot. 16-year-old Ross Paterson edged out Ross Hartigan for third spot in a frantic sprint for the line, finishing in 19:41.

“I didn’t expect that at all,” admitted Buck afterwards.

“Obviously to take the win I knew I would have to build up a bit of a lead in the beginning. I had a good start, I knew I had a lead so I just didn’t look back. I had no idea the lead had built up to that much.

“If you told me 10 years ago when I did my first Midmar that one day I would be standing here as a champion, I definitely wouldn’t have believed you.”

McGlynn, who has recently recovered from Covid and a chest injury and wasn’t able to train as planned, was full of praise for Buck.

“I wasn’t sure what to expect,” he said.

“I know what I can do when I’m in shape. Obviously I would have loved to win, but it’s the first time I’m not disappointed with second. I’m okay with that. Today second was the best that I could do so I’m happy… I got out in front in the beginning but Connor was just better prepared than me so well done to him.”

Earlier in the day, Kelly Wynne-Jones emerged as the surprise winner in the girls 13 and under category. Visiting from England, this was the teenager’s first time swimming the Midmar Mile and she took a wrong line, ending up on the bank well down from the official finish area. But she still had the time to head back in the right direction and crossed the finish in 24:21.

“I’ve never done it before so I wasn’t sure where to go,” she said afterwards.

“I’ve also never really done a competition in a dam – I normally just do it in the pool but it was good. I liked it.”

Finishing as the top boy in the 13 and under category was Jedrick Geleta who stopped the clock at 21:23.

Meanwhile, Gary Albertyn was in impressive form in the men’s 51-60 race. Having completed the 16-mile charity challenge on Friday, Albertyn claimed victory in his age group in a time of 21:11, beating the 31 to 40s and 41 to 50s in the process.

“I was feeling it a bit this morning, but it went well. The water was nice and calm so I had to just put my head down and go,” said Albertyn, who has now completed a whopping 142 miles after all his charity swims.

“When you get into the race adrenaline takes over and then you get going.”

On a day filled with impressive milestones, other notable performances came from Ingrid Trusler, who took the women’s 61 to 70 title in 24:44 and Derek Fyfe who, swimming his 30th Midmar Mile, claimed the men’s 81 and over title in 35:27.

Gail Bristow, who finished third behind Trusler, completed her 48th consecutive Midmar Mile after having a knee replacement in December.

“Every year one’s just very grateful to be here in one piece,” she admitted.

“It was a lovely race. Nice, flat water. I’ll come back next year hopefully a little bit fitter for the 50th anniversary. I had another knee replacement at Christmas so now I have all my bits in order and I’ll hopefully be fitter for next year.”