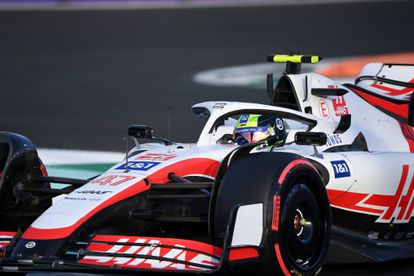 Mick Schumacher insisted on Saturday ‘I’m OK’ but he will not take part in Sunday’s Saudi Arabian Grand Prix after crashing his Haas car at 240km/h in qualifying on Jeddah’s high-speed street circuit.

“Hi everyone, I just wanted to say that I’m ok. Thank you for the kind messages. The car felt great @HaasF1Team, we’ll come back stronger,” tweeted the 23-year-old German driver who was airlifted to hospital after the crash.

After Mick Schumacher’s crash Haas will run one car

Haas, meanwhile, said they will run just one car in Sunday’s race with Kevin Magnussen carrying their hopes.

READ | SAUDI ARABIAN GRAND PRIX: WHAT TIME DO THE LIGHTS GO OUT?

“Schumacher was taken to the trackside medical centre following a significant accident at Turn 12,” said Haas in a statement.

“After his assessment revealed no injuries, he was transferred to King Fahad Armed Forces Hospital in Jeddah for precautionary checks.

“The team has subsequently taken the decision to contest the Saudi Arabian Grand Prix with the sole entry of Kevin Magnussen.”

The German driver, the son of F1 legend Michael Schumacher, would have started Sunday’s race in 14th position.

However, his weekend ended in terrifying fashion when he lost control of his Haas at high speed, clipped a kerb and then went straight into the wall.

Two wheels were torn away from the car in the impact during the second qualifying session.

Haas reported that Mick Schumacher appeared “physically fine” and had spoken to his mother, Corrina.