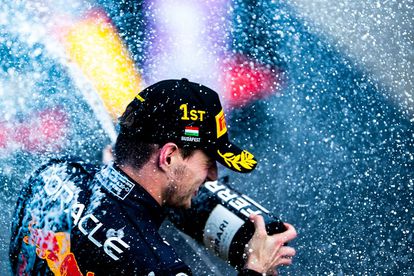 World champion Max Verstappen took full advantage of another Ferrari implosion on Sunday to increase his lead in this year’s title race with a measured victory for Red Bull at the Hungarian Grand Prix.

Just a week after his win at the French Grand Prix, the 24-year-old Dutchman grabbed his first success at the Hungaroring from 10th on the grid to finish 7.8 seconds clear of Mercedes’ Lewis Hamilton and George Russell.

His win lifted him 80 points clear in the championship as nearest rival Charles Leclerc, unexpectedly given hard compound tyres when he appeared to be the fastest driver, came home sixth behind Ferrari team-mate Carlos Sainz and Sergio Perez in the second Red Bull.

It was a crushing disappointment for Leclerc and Ferrari after their recent resurgence as Max Verstappen took his eighth win of the season and the 28th of his career.

“When we woke up this morning who would have thought we would win this race?,” said Max Verstappen.

Hamilton, who was bidding for an unprecedented ninth victory in Hungary, praised his team for his fifth podium finish in succession.

“It’s special for us today and we are clearly closing the gap. It’s great to go into the summer break with this performance.”

Russell, who led for 30 laps from pole position, said: “I really struggled on the medium tyres and in the latter stages, but Lewis did a great job. I tried to eke it out and I’m pleased with a podium.”

The race began amid forecasts of intense rain, a few spots creating apprehension on the grid.

But Russell made light of any worries, or nerves, with a smooth start from his maiden pole position to lead into Turn One where he resisted a forceful challenge from Sainz.

Behind them, Hamilton swept past both Alpines to take fifth.

By lap five, Russell led Sainz by two seconds with Leclerc third ahead of Norris and Hamilton as Verstappen began to climb after starting down in 10th.

By lap 10, the world champion was up to sixth behind Hamilton, on mediums, and running 11 seconds off Russell, who was 2.2 seconds clear of the Ferraris.

Hamilton swept inside Norris on lap 12 at Turn One to take fourth with Verstappen following him at Turn Two, both men using their Drag Reduction System (DRS).

Released into clear air, Hamilton pulled clear as Verstappen reported engine issues and Leclerc asked Ferrari if Sainz could go faster – a coded suggestion that he wanted to pass him.

All this allowed Leclerc to lead ahead of Hamilton with Russell rising swiftly to third before inheriting second when he also pitted, returning seventh.

Leclerc led by 19 seconds before he came in on lap 22 for more mediums and Russell led again with the Monegasque second, two seconds adrift, but ahead of team-mate Sainz and the threatening Verstappen.

By lap 27, Leclerc was close enough to attack Russell, which he did without success for four laps before passing on lap 32.

Russell had defended stoutly after leading more laps for Mercedes in one race than the team had enjoyed all year, but by mid-race, lap 35, Sainz had closed on him and Verstappen was on his tail before pitting on lap 39.

He passed him, spun at Turn 13 and fell to fourth before regaining his composure to take advantage of Leclerc’s tyre disadvantage on lap 45. Ferrari’s strategy for Leclerc was in question again.

Another slow Sainz stop on lap 48 lifted Hamilton to lead, leaving the Spaniard fifth, on softs, with 22 laps to go and Verstappen second.

Hamilton made his second stop, taking softs, on lap 52. He re-joined fifth, 9.6 behind Sainz as Verstappen led Leclerc.

Less than 10 seconds separated the top five with 16 laps remaining and Hamilton charging, taking Sainz for third on the straight to set up a dramatic finale.

Chiefs’ Billiat: How Sundowns got the best out of him

One step ahead: Gauteng’s top spots to renew your driver’s license