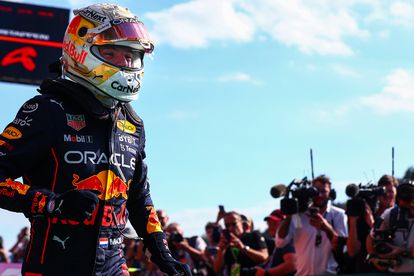 George Russell and Lewis Hamilton are on the front row for Sunday’s Brazilian Grand Prix, but Max Verstappen is lurking close behind! Photo: Twitter @RedBullRacing

George Russell and Lewis Hamilton are on the front row for Sunday’s Brazilian Grand Prix, but Max Verstappen is lurking close behind! Photo: Twitter @RedBullRacing

Verstappen’s closest title rival has fallen off the pace recently and would love to take one off the Red Bull driver on his own patch.

Leclerc fell just short of snatching pole in the end.

Verstappen had logged a lap of 1m 10.342s in Q3 just before Red Bull teammate Sergio Perez, spun at Turn 13 to bring out a yellow flag and prevent anyone else from beating the Dutchman’s time.

Leclerc had looked to be building up to a fliying final lap that might have taken pole but ended up 0.021s off the home favourite in P2, while Q2 leader Carlos Sainz qualified P3 – under a tenth off pole to ensure Verstappen will have a Ferrari behind and alongside him when the race gets underway at Zandvoort on Sunday.

F1.com report: “Lando Norris qualified seventh, with Mick Schumacher a surprise eighth and Yuki Tsunoda an equally surprising ninth. Lance Stroll made it to Q3 but a technical issue saw him confined to the garage and settle for 10th on the grid for Aston Martin.

“Pierre Gasly qualified 11th ahead of compatriot Esteban Ocon, while Fernando Alonso finished 13th in Q2 as neither Alpine made it to the top 10 shootout. Zhou Guanyu took P14, ahead of Williams’ Alex Albon.

“Valtteri Bottas was knocked out in P16 as his Alfa Romeo team mate Zhou made it through to Q2. Haas’s Kevin Magnussen’s track limits infringement saw him finish 17th, ahead of McLaren’s Daniel Ricciardo, Aston Martin’s Sebastian Vettel – who took P19 having run into the gravel on his final flying lap – and Williams’ Nicholas Latifi backing up the pack.”