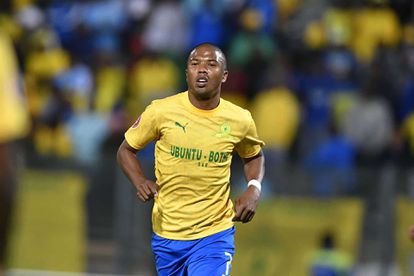 Mamelodi Sundowns are hoping their fans can replicate the atmosphere produced by Al Ahly in Cairo when they take on the Egyptian club in Attridgeville.

Al Ahly bring a 2-0 advantage from the home leg and Sundowns want to bounce back.

Downs have called on all South African football fans to turn up to the Lucas Moripe Stadium and create a yellow wall.

“We expect our supporters to fill up the Lucas Moripe Stadium. It will give us a massive boost like Al Ahly [fans] did [in Cairo]. We experienced it in Wydad and everywhere,” Sundowns midfielder Lyle Lakay said in the build-up to the match.

“We are appealing to all the supporters to come in big numbers to fill Atteridgeville and make it a big yellow wall so that we intimidate them.”

The last time the Egyptian giants visited South Africa they were on the wrong end of a 5-0 drubbing, something that Lakay feels will be in the back of their minds when they show up in Tshwane.

Lakay insists that having the fans backing will help motivate Sundowns to perform at their highest level and overturn the deficit.

“At the back of their minds they still have that 5-0 that happened last year. That will also play a big factor according to them. We know it’s not the same game but they will be thinking about that.

“Coming to Atteridgeville and having supporters back us, when they fill the stadium, it gives us that extra confidence and motivation to perform better.”

Sundowns played a cagey game in Cairo but will need to come at the eight-time continental champions if they are to retain any hope of adding another star to their badge.

In the first leg Downs struggled to get forward due to persistent fouls from Al Ahly which went largely unpunished by the referee, who showed just a single caution to the Egyptian side. Ahead of the second leg, Al Ahly are reportedly unhappy with the appointment of Gambian referee Bakary Papa Gassama.

Sundowns coach Pitso Mosimane would not be drawn on the subject and said he was happy with the official.

“I don’t want to go to Al Ahly’s unhappiness with the referee. We don’t play in that space as Mamelodi Sundowns,” says Mosimane.

“So whoever CAF appoints for all our games… we are a football team. We appoint referees now? We don’t want to be part of that. We want to play because the referee doesn’t score goals for you.

“For me Gassama is a very credible guy. The guy went to the World Cup. Unless there is reference for them to say ‘in this game he did this, in that game he did that’ against them.

“I know the guy, he is professional, very strong referee. He officiated in all our games and has been good.”