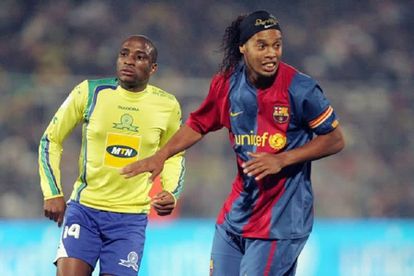 Johannesburg’s FNB Stadium is readying itself for what could be an epic clash, as European giants, FC Barcelona fly down to South Africa to take on one of Africa’s biggest clubs currently, Mamelodi Sundowns.

With the fixture confirmed and the tickets already on sale, excitement around the game is bound to pick up considerably, with already an enormous buzz created since it was first announced a week ago.

Recently crowned champions in their respective leagues, the two sides will be reacquainted for the first time since 11 years ago, during the off season which followed Sundowns’ fifth and second consecutive league title, while Barcelona narrowly missed out on top La Liga honours to arch rivals, Real Madrid.

The match was played at a packed Loftus Versfeld, with a decent showing from Barca fans, mostly locals.

The home side was coached by Gordon Igesund who, much like he did with Manning Rangers, Orlando Pirates and Santos, won the league title in his first season in charge.

With not too much at stake, the game exceeded its billing as a friendly game, as it provided fireworks, and was not without the usual showboating one expects at an exhibition match.

It was a dream start for the Pretoria side, as Venezuelan forward laid a pass on the path of former Bafana man, Surprise Moriri, who unleashed a shot from just inside the box to make it 1-0.

They held on to the lead for most of the game, and it was in the closing stages of the game when Sundowns keeper, Calvin Marlin cleared a free kick from Ronaldinho straight back in to the opposition’s feet, and Santiago Ezquerro capitalised on the defensive scramble that followed to level the scores.

The Spanish giants then delivered the killer blow through Marc Crosas, who pounced on an expertly placed pass from the Brazilian to make it 2-1.

When will the game be played?

After brief uncertainty surrounding the match, it will go ahead on Wednesday, 16 May, and tickets are on sale with prices ranging from R40 for the upper-tier seating, while premier seating would cost a whopping R550. For more details, click here.