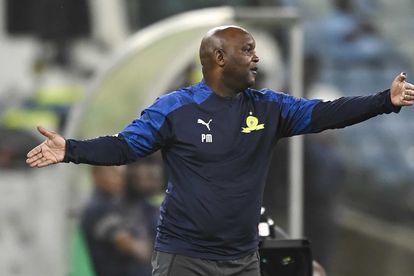 Mamelodi Sundowns coach Pitso Mosimane says having a target on their backs is the price the club pay for their ambition.

Mosimane said he was surprised to read that Orlando Pirates coach Josef Zinnbauer was already talking about his team. Sundowns face Pirates in a PSL match on Tuesday 17 March.

The former Bafana Bafana coach says that his side are constantly thrown into battle against fresh opponents because they do well on so many fronts.

Sundowns will face a fresh Pirates side just three days after travelling to Tembisa to take on Owen da Gama’s Highlands Park in the Nedbank Cup.

Downs are the only team still in the title race also competing for South Africa’s most prestigious cup.

“It’s difficult for us. We are playing against well-rested teams. I heard the coach of Orlando Pirates, I was surprised, because Pirates are speaking about our game. What I forgot is that it’s their next game,” Mosimane said.

“I have my mess here. I have got Highlands Park and last week the Pirates coach was speaking about my game. When I realised I said it’s okay, they are going to be well-rested and waiting for us.

“I was reading again today Owen Da Gama talking about our game. I said we are in trouble. But that’s the price you pay when you are ambitious and greedy.”

This is the stage of the season where Mosimane customarily ramps up the mind games with his opponents as a means to put pressure on his rivals and as a result relieve the pressure on his own squad. Mosimane has been comparing the workloads of the top sides all season, highlighting at every turn how much football his team have been made to play.

Mosimane had his team selection for the clash against Al Ahly criticized with the starting XI lacking pace in midfield but a return to the PSL brought the Brazilians back to winning ways.

Mamelodi Sundowns may have been dumped out of the Champions League, but they remain in the hunt for a domestic treble having claimed the TKO trophy in Durban earlier this season, progressed to the last eight of the Nedbank Cup and holding second place in the league four points off the leaders.

Three matches in eight days will see Mamelodi Sundowns take on Highlands Park in the cup and the league either side of the clash with Orlando Pirates.