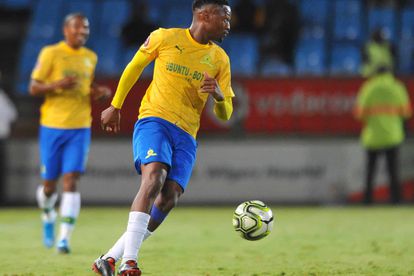 As Mamelodi Sundowns’ coach Pitso Mosimane chases a second CAF Champions League title, he will have to find a solution in defence due to injuries to both of his experienced right back options in Anele Ngcongca and Thapelo Morena.

For away games of this magnitude, the coach usually selects Ngcongca at fullback for his vast experience –having played in the UEFA Champions League for Racing Genk – and his excellent aerial ability in what can often be physical continental matches. Morena is generally used further forward to track the opposition’s left back, whilst offering his searing pace for Downs on the break.

Pitso Mosimane explained after his side’s 2-0 Nedbank Cup win against Vaal University of Technology that he has a problem in that position to deal with, whilst also confirming that he would not select inexperienced fullback, Nicholus Lukhubeni for the match:

“Unfortunately I don’t have Anele for that match. It’s not nice and I don’t have Thapelo for the right-back position. But I will make a plan. But it’s not going to be Nico [Nicholus Lukhubeni]. The boy is still young, coming up. We will see and probably play Madisha [as right-back]. Langerman is not ready.”

Since the return to full fitness of the outstanding Ricardo Nascimento, it has seen Mosa Lebusa move into the left back role on three occasions, with Motjeka Madisha partnering the Brazilian in the middle. Against Al Ahly, Madisha is likely to play at right back due to his height to defend Al Ahly crosses from their right to Sundowns’ back post.

Soweto Derby: The who’s who on Kaizer Chiefs’ goal and assist charts

With Tebogo Langerman not expected to be fit at left back, it could mean that Wayne Arendse partners Nascimento with the side’s most-used central defenders this season in Madisha and Lebusa both being used at fullback.

That quarter would give incredible height and ability to protect the centre, but not much width or attacking thrust going forward on the overlap when Madisha and Lebusa receive possession. It would likely signal that Pitso Mosimane is playing for a 0-0 draw on the road and looking to attack more in the return leg at home in order to progress.

Further forward, the coach could also be tempted to supplement his usual midfield duo of Andile Jali and Hlompho Kekana with Tiyani Mabunda as a third defensive midfielder. That may leave Sibusiso Vilakazi isolated up front, though and invite 90 minutes of pressure on his troops.

When the team lineup is revealed one hour before kickoff, it will give a strong indication of how defensively Sundowns are going to play in this game. If we see Lyle Lakay at left back or Lebohang Maboe in preference to Mabunda, then it will show that Downs want an away goal.